CAA, Population Register Will Have No Impact On Delhi Polls: Raghav Chadha

Raghav Chadha said the Bharatiya Janata Party might try to "polarise" the environment ahead of the polls. 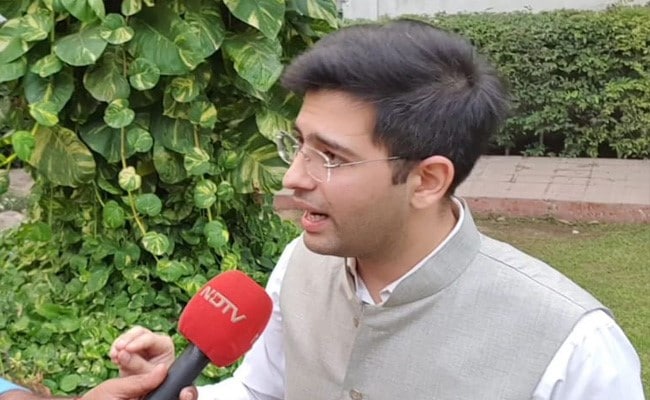 The Citizenship (Amendment) Act and the NRC would not have resonance in the Delhi Assembly polls as they are national issues and the elections in the national capital will be fought on state matters, AAP's Rajinder Nagar candidate Raghav Chadha said.

Thirty-one years old AAP leader is fighting his first assembly election. However, it is not the first time he is facing the polls.

When asked if he thinks that the upcoming elections will be a referendum on the CAA-NRC, he said, "Absolutely not because elections are going to happen on state issues. These are issues of national importance and I personally feel they will have no resonance in Delhi."

The AAP spokesperson said the Bharatiya Janata Party might try to "polarise" the environment ahead of the polls. "However, I feel people of Delhi are intelligent enough to see through this propaganda of the BJP," he said.

He said if the last assembly polls are any guide, it explains that people reject national issues in state elections and concentrate only on issues concerning their state.

Calling the last year's Lok Sabha polls a "fantastic experience", Chadha said he did not lose to BJP''s Ramesh Bidhuri but to Prime Minister Narendra Modi.

The AAP leader had lost by over three lakh votes to Bidhuri. "It was my first election, it was a big election and I went door to door and literally visited every household in my Lok Sabha constituency and despite that the result was in favour of Prime Minister Modi because it actually became a presidential style election where the narrative of the election was Modi vs who," he said.

"I didn''t lose the election to Ramesh Bidhuri. Modi won against me," he said, noting that this assembly election''s narrative is "Kejriwal vs who".

"I feel that the Aam Aadmi Party is going to sweep Delhi once again and we will probably outdo our performance of 2015," he added.

The suave and sophisticated chartered accountant said he decided to fight the polls from the Rajinder Nagar constituency as he wanted to make his "janam bhoomi (birth place) his karam bhoomi (work place)".

"My area, my birthplace and my constituency. I was born in a hospital in this area. My father side of the family lives in old Rajinder Nagar and I live with my parents in New Rajender Nagar. My maternal family lives in Narayana which is in this constituency. Between them is Inderpuri Dasghara Todapur where I have spent my entire childhood playing cricket and eating ''chola bathuras''," he said.

"From Pandav Nagar to Karol Bagh these are the areas where I have lived all my life. I have been given an opportunity to make my birth place my work place, make my ''janam bhoomi'' my ''karam bhoomi''," he added.

Listing out the issues he aims to address in his constituency, Mr Chadha said the problems which people face varies from area to area.
"When you talk about Dasghara, Todapur, Buddh Nagar and Pandav Nagar, problems related to water and sewage are there so it varies from place to place," he said.

The AAP leader said he is likely to come out with a "sankalp patra" for each of these areas.

"Over and above that also I am going to do a lot of things but that is the bare minimum. It is likely to come out late this month or early next month," he added. Responding to the remarks made by BJP''s R P Singh that Chadha does not have experience to run the assembly, the AAP candidate said he concedes that he lacks experience. "I concede that I lack experience when it comes to practising communal corrupt politics. I do lack experience when it comes to ignoring the people of constituency," he said.

The Delhi Assembly polls will be held on February 8 and the counting of votes will take place on February 11.

The Aam Aadmi Party has dropped 15 sitting MLAs from its list of 70 candidates and given ticket to a total of 24 first-timers, including Atishi, Dilip Pandey and Mr Chadha who unsuccessfully contested the 2019 Lok Sabha elections.