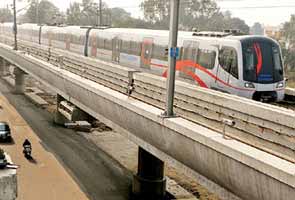 New Delhi: A day after suspending operations for an indefinite period at the Delhi Airport Metro Express, due to safety issues, the government today assured the public that it will be reopened once necessary repairs are complete.

"The Reliance Infrastructure reported that there are some defects in the civil structure. There are problems with the bearing which is the interface between the pillar and girder. Repairs have to be done below the girders and it is in odd kind of locations," said Sudhir Krishna, Secretary, Urban Development.

The 23-kilometre-long Delhi Airport Metro Express is one of the country's fastest metro corridors where trains run at speeds of 105 kilometres per hour. The line is barely 16 months old.

Reliance Infra operates and maintains the corridor, but the civil structure was built by the Delhi Metro Rail Corporation (DMRC). Over 10 percent of the bearings, that's about 230 out of 2100, need repair.

Following the serious concerns raised by the operator regarding safety, speeds on the corridor were reduced to 25 kilometres per hour. The DMRC admitted the defects in the civil structures and has agreed to carry out necessary rectifications.

A committee comprising officials from the Indian Railways, Delhi Metro and Reliance Infrastructure is already going into the nature of defects and would submit a report within the next 10 days.

For a project that cost nearly Rs 6000 crore, and used daily by thousands of commuters travelling to and from the capital's international airport, the inconvenience is huge.

"There was no prior announcement, but today they informed that they are closing, I am shocked," said a dejected commuter.

Promoted
Listen to the latest songs, only on JioSaavn.com
"I come from Dwarka to Shivaji stadium line. It had been very easy for me, but now it's going to be difficult," said another.

A suspension of two months that could well be further delayed for inspections and clearances once the repair is done means the impact on the image of India's flagship mass transit system is equally huge.