Delhi Air Pollution: Parents of the participants present at the marathon said exposure to the polluted air is causing eye irritation and other health problems among their children. 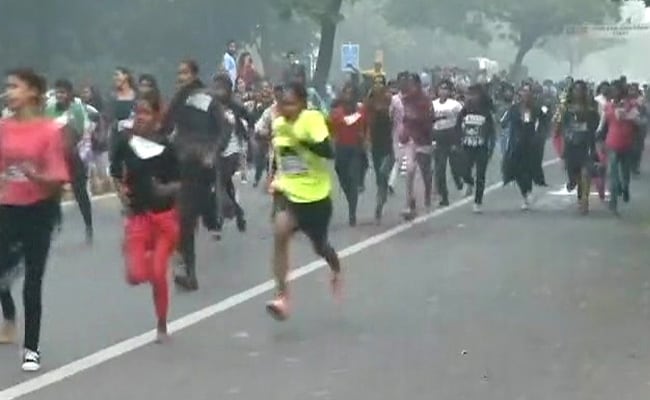 Delhi Air Pollution: Scores of children were seen running at a marathon in Delhi's Chanakyapuri.

With Delhi battling air pollution and the air quality hovering around the emergency zone, a marathon named ''Run for Children'' was organised in the capital that could be risky for the lungs and heart of the runners.

Scores of children were seen running at Vinay Marg in Chanakyapuri, the area filled with dust pollutants this morning.

On its 31st anniversary, Prayas, a non-governmental organisation based in Delhi organised the children's marathon ''Run for Children'' in Delhi.

Delhi: A 'Run for Children' was flagged off in the national capital earlier this morning. pic.twitter.com/TzdGNt92HA

As air pollution levels are nearing ''severe plus category'', schools in Noida, Ghaziabad and Delhi have been shut for two days starting today, hours after the Supreme Court-mandated anti-pollution authority EPCA yesterday said that they should be closed as pollution in the region hovered close to ''emergency'' levels.

Children and infants are more susceptible than adults to air pollution as they still developing and their respiratory tracks are more permeable.

Parents of the participants present at the event told ANI that exposure to the polluted air is causing eye irritation and other health problems among their children.

"We should (not) have come here today. My husband was telling me not to come. Eye irritation is a common thing among children. We are facing a lot of issues due to the increase in air pollution. Pregnant women are facing problems due to spike in pollution levels," a parent named Monika said.

"Children are falling ill due to toxic air. Some of the participants have also missed the marathon due to pollution today. One boy while running puked and is now taking rest," said Payal, another parent.