New Delhi: Aman Awasthi, 61, moved to Delhi in 2004. After developing a heart condition, his doctors advised a strict diet and regular exercise. So Mr Awasthi made it a point to walk for 30 minutes and top up the hour running every morning. "How ironic that now doctors are saying don't run. It will turn out to be unhealthy. This is the price of retiring in a city," he said.

On a sunny but somewhat foggy morning, a group of Lycra-clad runners stretch their hamstrings in Delhi's Nehru Park. Sporting yoga mats, water bottles, breathing masks and heartbeat monitors, the group is meeting for their weekly training for the Airtel Delhi Half Marathon.

Now, they don't know for sure whether the event will be held at all.

The Indian Medical Association (IMA) has asked the organisers to cancel the marathon to be held on November 19 at 7 am amid rising level of air pollution in the national capital. Health experts are saying that bad air quality can aggravate existing lung diseases and asthma.

"High PM2.5 levels can increase blood pressure and increase the risk of acute cardiovascular events such as heart attack and stroke. Hence, we demand that the event be cancelled immediately and be organised at a later date when air quality gets better," the IMA said in a statement.

Particulate matter or PM2.5 refers to air pollutant that can harm the human body. Thirty times smaller than the width of a human hair, the size of the PM2.5 pollutant makes it dangerous for the human body. Another pollutant, PM10, may get trapped in the throat, but PM2.5 is fine enough to pass these natural barriers and enter the lungs and the bloodstream, doctors say. 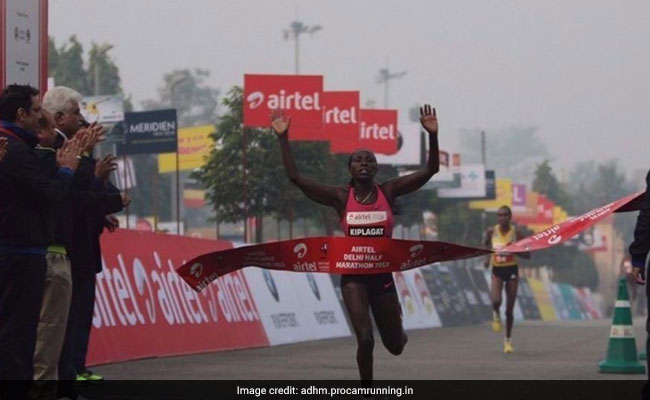 Organisers say they will deploy nebulisers along the marathon's routes (File)

The organisers of the Airtel Delhi Half Marathon, however, want to go ahead with the event. They have said that the IMA's suggestion that the marathon should be cancelled or held another day when air quality improves is "short-sighted". The organisers say they have the support of international athletes despite alarms over pollution level in Delhi.

The organisers say they will deploy nebulisers along the marathon's routes to help people if they developed abnormal breathing pattern along with ambulances carrying oxygen tanks. A nebuliser device changes liquid medicine into a fine mist so that the patient can breathe in the mist easily.

Reeti Sahai, a resident of Delhi, has run seven editions of the Airtel Delhi Half Marathon and is training for the eighth one. "Just like me, many more have been training for months now and there'll be participants from Ethiopia, Kenya and many Indian states. They should have thought about cancellation earlier, not at the last minute," she says.

The IMA is not impressed. The association's national president Dr KK Aggarwal says the organisers want to proceed with the marathon despite knowing the risks. "Will Airtel be responsible if someone becomes really sick during the run? We will speak with the chief minister and take it up with the Chief Justice," he said.
Comments
Airtel Delhi Half MarathonDelhi air pollution