Cut Off From Home, Kashmiris In Delhi Observe Eid At Jantar Mantar

The Eid event was attended by many like author Arundhati Roy, journalist Paranjoy Guha Thakurta and activist Harsh Mander.

Kashmiris in Delhi said being away from home was an uncomfortable situation.

Tears, anxiety and an eerie calm is what Eid looked like for most Kashmiris who gathered at Delhi's Jantar Mantar today at an event called "Eid Away From Home". It was anything but celebration.

Both Kashmiris and non-Kashmiris attended the event which was organised by Kashmiri students living in Delhi. The organisers claimed that with their family back home being under a lockdown there was nothing to celebrate, they just wanted to "observe" Eid to support the resilience of Kashmiris.

Zubair Rashid, a 23-year-old who is preparing for civil services in Delhi, dedicated a poem on the stage to his family in Kashmir. Zubair's eyes welled up with tears as he read out, "Miracles will happen and when there is no more helplessness that day I will come and hold your hand and we will celebrate Eid together and forever." He also mentioned his family in the poem - his father who is in Kashmir police force, an ailing mother and a younger sister.

"Even if somebody here had been away from their family, had not spoken to them for days, communication lines had been blocked they get emotionally vulnerable. These tears are because of missing my family. They are not tears of weakness. When I woke up in the morning, I did not get any vibes of Eid. I have celebrated every Eid at home. It's a happy occasion there but for the last five to six days I have been emotionally vulnerable. Humanity has been shamed because of what has been happening there," Zubair told NDTV. 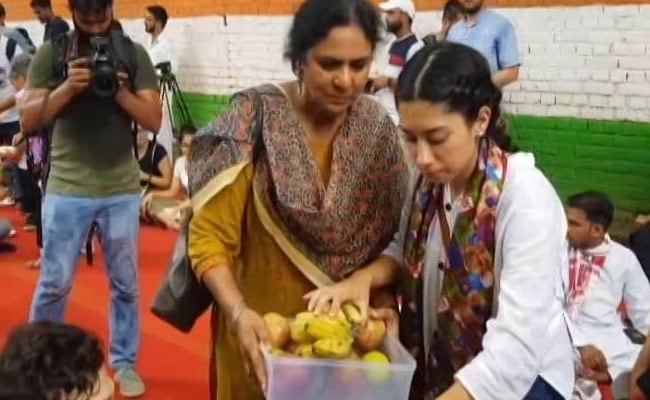 Mannat Shuja, a 21-year-old who is pursuing her Master's Degree from Jamia Millia Islamia University, hasn't spoken to her mother for the last eight days. "I spoke to my mom last on 4th August. Like every time I had decided to go home and celebrate it with everyone else like last time. There is no feel of celebration. When I think about them all I feel is fear. News reports are saying that even Namaz could not take place at several mosques and roads are desolate. That adds to the fear," Mannat said.

Several people including non-Kahsmiris poured in to express their support. Many brought food while others like social activist Harsh Mander were seen helped in serving it. Author Arundhati Roy and journalist Paranjoy Guha Thakurta were also present at the event. Mr Thakurta said, "I think it's important for all non-Kashmiris to show support to their Kashmiri sisters and brothers irrespective of what your views might be on the revocation of Article 370. I think a gathering like this to show solidarity with those who are unable to go to their families on a festive occasion like this has become very important. I personally think that the measures taken by the government in Kashmir are not going to lead to the betterment of that place."

People in Jammu and Kashmir observed a muted Eid, amid a strict security clampdown and communications blackout, days after the central government revoked the state's special status and divided it into two union territories.