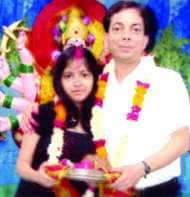 New Delhi: It is a love story that had all the drama and ups and downs of a Bollywood potboiler. Most importantly it had a happy-ending. 37-year-old Kaushal Thakur and 23-year-old Shruti Tiwari are together again.

The couple met, fell in love and got married in Delhi last year. But when Shruti's family found out, they were not prepared to accept the match because of the difference in age and castes.
Shruti Tiwari is an MA (Spanish) student of Jawahar Lal University (JNU) while Kaushal is a teacher and is completing his PhD from English and Foreign Languages (EFL) University, Hyderabad.

The duo got married secretly and got it registered on August 29, 2010, in Delhi, without either's family knowing about it. The couple had decided to keep their marriage a secret until the completion of her MA. Everything was smooth until, Shruti went on a semester break to her home in Ranchi.

Since she was home, on December 26, her brother Shailesh Tiwari, a captain in Indian army tricked her into disclosing her marriage to their parents. Her family was furious. They allegedly snatched her phone and she was not allowed to access any social networking sites.

"She somehow managed to contact me and told me about her pathetic condition. Soon after I received death threats from her family for which they were using my wife's number, so that they wouldn't get caught. My wife was brutally beaten up," said Kaushal.

It was only on Thursday that Kaushal managed to contact the District Magistrate, Ranchi and got Shruti out of her parent's grip. She was escorted to a women's police station, where a case is being registered against the members of her family.

"I was grounded and beaten up by my relatives. I cannot trust them on anything anymore," she said, speaking to MiD DAY from the police station itself.

Shruti who stays at the Godavari Hostel in JNU, had very few friends. On Thursday, around 200 students of JNU from the All India Students Association (AISA) and All India Backward Students' Forum (AIBSF) including her friends held a demonstration at the Jharkhand Bhawan for her safety.
Comments
New DelhiRanchiparents oppose marriage