Lockdown 4: Haryana had sealed the Delhi-Gurgaon border in view of the coronavirus outbreak; the national capital has recorded over 10,000 COVID-19 cases so far 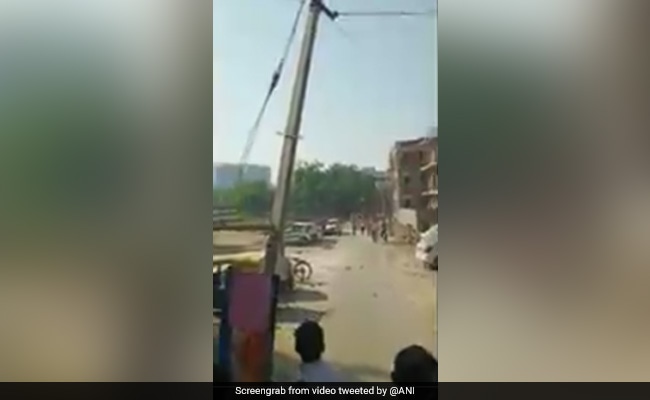 Lockdown 4 Haryana Police: Stone throwing in parts of Delhi over borders being shut

Violence broke out briefly along the Delhi-Gurgaon border on Wednesday morning after Gurgaon Police stopped migrant labourers and other people living in Delhi's Salahpur Kheda, a rural area of the national capital, from entering the state to work in industries and commercial establishments that reopened today.

In visuals of the incident, locals on the Delhi side of the border gathered looking to cross into Gurgaon for work. When permission was denied, some people threw stones at the police, some of whom were injured.

Videos of the face-off, apparently taken with mobile phones from rooftops of nearby houses, show large crowds of men and women gathered around small lanes as they wait for permission to cross.

Reinforcements were quickly called in and the situation is under control, police said.

#WATCH Delhi: Locals pelt stones at police on Delhi-Gurugram border near Palam Vihar, allegedly after they were not allowed to cross the border into Gurugram. More details awaited. (Note - Abusive language) pic.twitter.com/FZ9PKInsuf

Under guidelines for the fourth phase of lockdown, industries and factories have been allowed to re-open, albeit with certain restrictions on working hours and the number of employees allowed on the premises.

However, because Delhi-Haryana borders are sealed, except for those in essential services and holding e-passes, thousands were today stopped from crossing.

Also under lockdown guidelines, interstate travel is permitted providing origin and destination states/union territories agree. This means that for vehicular and people traffic between Delhi and Gurgaon, Haryana government must give its permission.

Haryana had sealed the Delhi-Gurgaon border in view of the coronavirus outbreak; the national capital has recorded over 10,000 COVID-19 cases so far.

The sealing came after Haryana minister Anil Vij lashed out at people who live in Delhi and work in his state, calling them "corona-carriers". The move created problems for thousands who lived in the national capital but worked in satellite cities Gurgaon and Faridabad, both of which are in Haryana.

Last week the Delhi High Court asked the Haryana government to remove special restrictions on its borders, including prohibiting people involved in essential services - such as doctors and healthcare and sanitation workers - from crossing.

The Haryana government gave an undertaking assuring that those involved in essential services will be allowed to cross, on production of an e-pass.

Similar confusion broke out at the Delhi-Noida border this week, with traffic jams reported after the district administration refused to allow vehicles to pass, following both the centre and the Uttar Pradesh government saying people could cross.

The Gautam Buddh Nagar administration, under whose jurisdiction the twin cities of Noida and Greater Noida falls, clarified saying "status quo" will be maintained, and people and vehicles will not be permitted, unless either involved in essential services or holding an e-pass.

Haryana has reported nearly 1,000 coronavirus cases so far, while UP is among the worst-hit states with nearly 5,000 cases.

Across India over 1 lakh COVID-19 cases have been reported, with over 3,300 deaths linked to the virus.