Shaheen Bagh Protests: The woman - identified as Gunja Kapoor - raised suspicion when she kept asking "too many questions", said eyewitnesses. 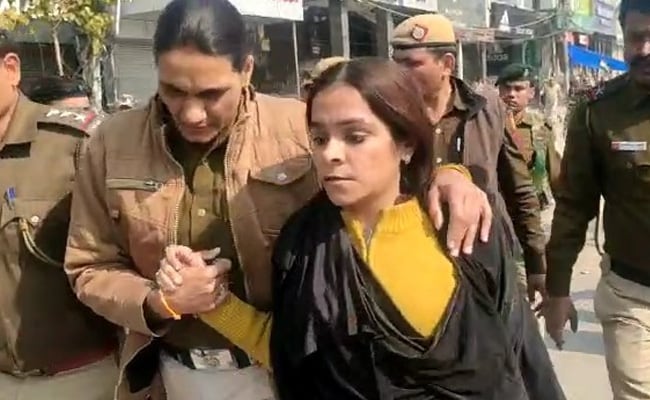 Gunja Kapoor was whisked away by police from Shaheen Bagh.

A burqa-clad woman was whisked away this morning by police at Delhi's Shaheen Bagh - the heart of protests against Citizenship (Amendment) Act or CAA - after her presence at the site of round-the-clock sit-in raised suspicion.

The woman - identified as Gunja Kapoor - raised suspicion when she kept asking "too many questions", said eyewitnesses. Some protesters insisted on frisking her and found a camera. This led to a commotion and she was caught by several women. Later, police came to the protest site and took her away.

Gunja Kapoor, who describes herself as the curator of a YouTube channel 'Right Narrative', is followed by Prime Minister Narendra Modi and BJP leader Tejasvi Surya on Twitter. On being asked by reporters why she was carrying a camera, Gunja flipped and said: "This is not media's hot moment. Go!"

#WATCH Political analyst Gunja Kapoor extricated by police after protestors at Delhi's Shaheen Bagh alleged that she was wearing a 'burqa' and filming them. #Delhipic.twitter.com/llRiKhMvOd

Visuals showed the woman surrounded by protesters as police tried to pacify them.

Last week, a 25-year-old man, identified as Kapil Gujjar, allegedly shouted "Jai Sri Ram" as he fired shots standing near police barricades put up near the protest site in Shaheen Bagh. Kapil Gujjar is an AAP member, police said on Tuesday. The statement has triggered a war of words between the AAP and the BJP ahead of February 8 assembly elections.

Protests have swept the country against the CAA or the Citizenship (Amendment) Act, which makes religion a criterion for citizenship. Critics say the law discriminates against Muslims as only non-Muslims from neighbouring Pakistan, Afghanistan and Bangladesh can become Indian citizens if they fled religious persecution and entered India before 2015.