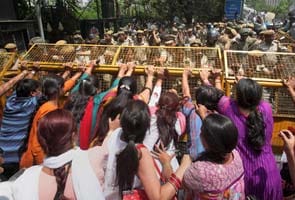 New Delhi: Protesters gathered at Delhi Police Headquarters for the third day today demanding removal of Commissioner Neeraj Kumar and justice for the five-year-old rape victim even as police put up barricades to prevent December-like protests near Parliament where traffic was disrupted.

The measures came against the backdrop of re-convening of the Budget session today.

However, in the morning hours, there were no protests at AIIMS like in the past three days.

Chaos was witnessed near Parliament as police closed Red Cross Road, Rafi Marg, Raisina Road and some crossings on Rajpath. There was trouble for vehicular movement near India Gate also as barricades were erected on Mansingh Road.

Caught unawares, many commuters coming from south Delhi had to take long winding routes to reach Connaught Place and nearby localities.

Long queues of vehicles were seen on many arterial roads leading to India Gate.

Promoted
Listen to the latest songs, only on JioSaavn.com
Barricades were setup on the roads leading to Parliament, near the Central Secretariat metro station, India Gate and near the Delhi Police Headquarters in ITO, to prevent any incident.