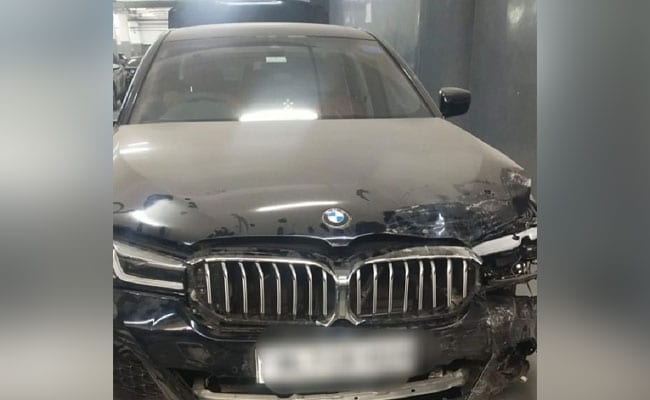 A speeding BMW hit a Wagon-R in central Delhi, which flipped over and hit people on the pavement

A 27-year-old man was arrested for driving his BMW car into another vehicle, killing two children sleeping on the pavement and injuring eight others in central Delhi, the police said on Thursday.

The accused has been identified as Sahil Narang, a resident of Delhi's Nirman Vihar, they said. He runs a garment manufacturing business in Noida, police said.

On June 10, police got information regarding the accident where two to three persons got injured under the Lodhi Road flyover. It was found that one Wagon R car was hit by a luxury car, police said.

The injured were taken to AIIMS trauma centre where Roshini, 6, and her brother Amir, 10, were declared 'brought dead'. Other eight persons were seriously injured, a senior police officer said.

Yatin Kishore Sharma, driver of Wagon R car, told police that around 4:30 am while they were coming from Samrat Hotel in Chanakyapuri and going towards Surya Hotel via Lodhi Road, one black colour car driven in a rash and negligent way hit their vehicle due to which their car flipped over and landed on the persons sleeping on the pavement under the flyover, the officer said.

After the incident, the accused ran away from the spot.

During investigation, police saw in one of the cameras that the offending vehicle turned towards Neela Gumbad, Nizamuddin, after the accident. Later, the number of the car was identified, which was found registered in the name of a person residing in Krishna Nagar, the officer said.

Police raided the residence of the owner, who said he had given his car to his nephew Sahil Narang to get it serviced at a workshop in Noida Sector 63. Thereafter, Narang was arrested from his residence in Nirman Vihar and the car has been recovered, Deputy Commissioner of Police (southeast) Esha Pandey said.

During interrogation, Sahil Narang revealed that he, along with his uncle, was coming from the airport and he was driving the car. The vehicle was newly purchased and he was testing its speed and control. During this, he met with the accident, the police officer said.