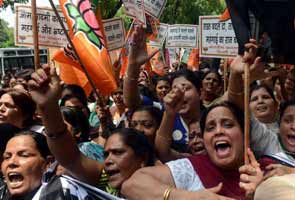 New Delhi: Over a 100 women activists of the BJP's women wing gathered outside the ruling Congress' office today to protest against steep price rise.

Holding placards in their hands, the activists of the Bharatiya Janta Party (BJP) Mahila Morcha gathered outside the Congress office at 24, Akbar Road in central Delhi, at about 1 pm and raised slogans against the central government.

Promoted
Listen to the latest songs, only on JioSaavn.com
The protesters tried to break through a barricade, leading Delhi Police to use water cannons to disperse them.

"We have detained few protesters, while others dispersed when we used water cannons. The detained protesters were taken in a bus to Parliament Street police station," a police official told IANS.