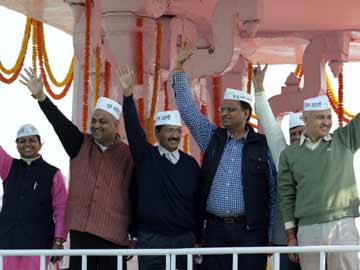 New Delhi: The Congress party, which was decimated by year-old Aam Aadmi Party in the December 4 Assembly elections, today chose to give Arvind Kejriwal's swearing-in as Delhi's seventh chief minister a miss.

The BJP was represented by a section of its Delhi unit leaders, including the party's chief ministerial candidate in the recent polls, Dr Harsh Vardhan.

In his speech after the swearing-in, the 45-year-old leader called Dr Harsh Vardhan a good human being. "Wish I could say the same about his party," he said.

Promoted
Listen to the latest songs, only on JioSaavn.com
The AAP made a stunning debut in the Delhi elections, bagging 28 seats out of 70. The Congress, with its eight legislators, has lent its outside support to the AAP's minority government.

Arvind Kejriwal defeated three-time chief minister Sheila Dikshit of the Congress in the recent elections by a massive margin in New Delhi constituency.