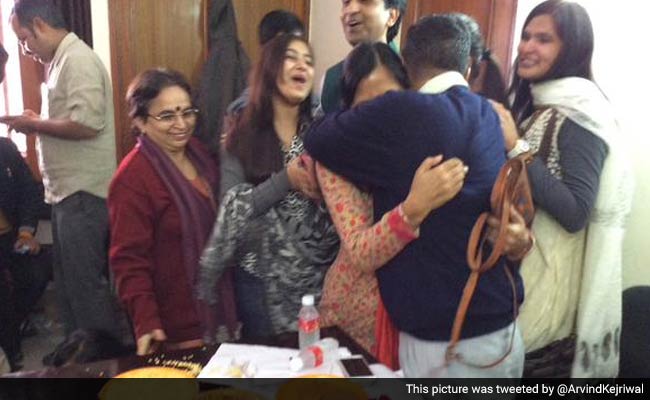 Arvind Kejriwal's first thank you tweet today as his Aam Aadmi Party registered a historic win in Delhi, was for Sunita, his wife, who made a rare appearance at the party's office.

Mr Kejriwal set to be Delhi's next Chief Minister, also tweeted pictures of celebrations. In one, he hugged his wife of 20 years.

Thank u Sunita for always being there "@rsaraf007: Sunita Kejriwal and @ArvindKejriwal first pics after winning pic.twitter.com/eDLxfxKMbd"

He had already thanked the people of Delhi, appearing on a balcony of his three-storey office in Patel Nagar, west Delhi, Sunita Kejriwal by his side in a printed orange salwar kameez.

Showered with rose petals, Mr Kejriwal, 46, said, "I salute the people of Delhi, they have achieved something spectacular." Sunita flashed the 'V' sign for victory.

"This is my wife," he told the frenzied crowds, putting his arm around her shoulders. Mrs Kejriwal smiled folded her hands in greeting, triggering a roar from the crowd, which was singing the AAP theme - Paanch Saal Kejriwal.

"I have dragged her here today," he  said. "I told her the government will not take any action... I would not have been able to achieve anything without her. I can do nothing alone, I am a small man."

Promoted
Listen to the latest songs, only on JioSaavn.com
AAP is leading in over 65  of Delhi's 70 assembly seats. The BJP could have to settle for an abysmal three or four seats.

Mr Kejriwal described the gigantic mandate for AAP, as "very scary". He repeatedly said he would not have been able to achieve it without his wife's support or his parents' blessings.