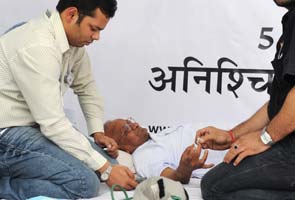 "Anna is fine and doing very well," said Pravin Sharma, a doctor at the MGM Medical College at Mumbai and a volunteer. He is among the team of doctors monitoring the 72-year-old Gandhian's health.

"His blood pressure was recorded 160/100, heart rate was 80 and urine output was adequate," said Sharma about Anna Hazare who launched an indefinite fast Tuesday, demanding a meatier anti-corruption Lokpal Bill.

Promoted
Listen to the latest songs, only on JioSaavn.com
Doctors treating him Thursday said that Anna Hazare's blood pressure has gone up and he has lost one kg weight.

Sharma said about six to seven people have been shifted to Ram Manohar Lohia Hospital since Thursday night because of acute dehydration, low blood pressure or drowsiness.