'Heartbroken' by Child Deaths From Dengue, Arvind Kejriwal on Surprise Visit to Hospitals

Delhi Chief Minister Arvind Kejriwal during a surprise check at a hospital.

New Delhi: Arvind Kejriwal, the chief minister of Delhi, today showed up at hospitals in the city for surprise checks amid anger over the death of two young boys from dengue after they were denied treatment by several hospitals.

Six-year-old Aman Sharma died on Sunday after allegedly being turned away by six hospitals, including the central government-run Safdarjung hospital, it was reported today. Aman's father Manoj told NDTV that when the child was taken to Safdarjung on Thursday after testing positive for dengue, the hospital said he was fine and could be taken home.

A week ago, seven-year-old Avinash died after his desperate parents failed to get him admitted to a single hospital. They allegedly committed suicide by jumping off a building two days later, the tragedy jolting the government into action.

Mr Kejriwal said: "It is heartbreaking. We have become blind in the race to make more and more profit. We shouldn't forget our humanity. Nothing would have been lost if the hospital had treated the child. Would it have affected their profit margin so much?"

The government, he said, is exploring a law that will enable the temporary takeover of private hospitals if they refuse patients during emergencies.

In pictures of his hospital checks, he was seen touring wards, meeting patients and speaking to doctors. 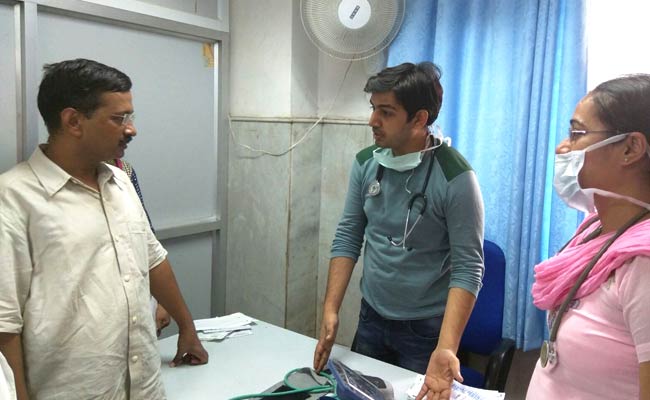 Delhi Chief Minister Arvind Kejriwal talking to a doctor during his surprise visit to a hospital.

The Delhi government has ordered an investigation into Avinash's death and has promised firm action against the hospitals accused of negligence.

"I want to take action, but am worried that if their license is cancelled, there will be a worse shortage of beds," Mr Kejriwal said.

All private hospitals have been summoned for a meeting by Delhi health minister Satyendra Jain.

Ten people have died of dengue and 1,800 have been affected in what doctors say is the worst outbreak of the disease that the city has seen in five years. The leaves of doctors, nurses and paramedics have been cancelled and the government has ordered 1,000 more beds in hospitals.
Comments
denguedengue deathstwo children diedArvind KejriwalAAPAAP governmentDelhi government