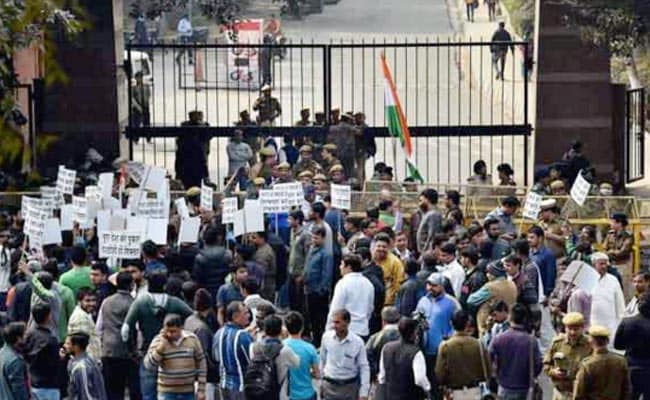 The February 9 events led to widespread protests in and outside JNU. (File photo)

The inquiry report was sought from the Chief Proctor's Office by Delhi Police's anti-terrorism unit, Special Cell, which is probing the sedition case registered in connection with the event on the campus against hanging of Parliament attack convict Afzal Guru.

"The special cell had contacted us for a copy of the report and we have sent the same," a senior university official said.

JNU Students Union President Kanhaiya Kumar, Umar Khalid and Anirban Bhattacharya were arrested in connection with the sedition case in February, triggering widespread protests. They are now out on bail.

On basis of the recommendations of the probe panel, the JNU had earlier this week announced punishments against several students in connection with the event.

While Mr Kumar has been slapped with a penalty of Rs 10,000 on grounds of "indiscipline and misconduct", Mr Khalid, Mr Bhattacharya and Mujeeb Gatoo have been rusticated for varying durations.

Financial penalty has been imposed on 14 students. Hostel facilities of two students have been withdrawn and the university has declared the campus out of bounds for two former students.

ABVP member Saurabh Sharma, who was complainant of the event, has also been slapped with a fine of Rs 10,000 for blocking traffic.

The report has two sections -- findings and recommendations. The inquiry had brought out four major aspects of the entire row -- the event, the procession, the sloganeering and the lapses on part of the administration.

The section on findings was last month shared by the university with 21 students who have been issued a show-cause notice in this connection but the recommendations have been kept out of public domain.

The inquiry panel had concluded that provocative slogans at the event were raised by a group of outsiders. However, it was "unfortunate" that the students allowed that to happen, it had said.

The panel had also noted lapses on part of the university's security unit, saying it did not make any efforts to stop outsiders from shouting slogans and stopping them from leaving the campus.