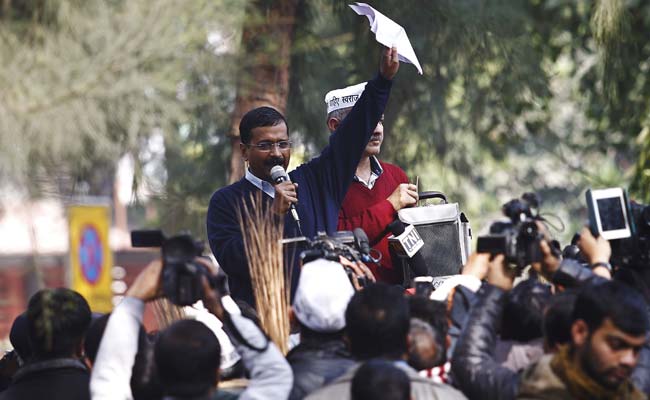 Ghaziabad: Anti-corruption crusader Arvind Kejriwal has shaken up India's political landscape with promises to change a rotten system: Now he is scrambling to dispel fears that his populism and rabble rousing could be a liability for Asia's third-largest economy.

Barely a year after founding the Aam Aadmi Party (AAP), the former tax collector made a stunning debut in Delhi legislative elections last month, crushing the ruling Congress party and preventing the Bharatiya Janata Party (BJP) from taking control of the city.

As India heads to a general election due by May, Mr Kejriwal - now chief minister of the country's capital - is preparing to wrongfoot the mainstream parties on a much larger scale.

If he succeeds, the implications could be profound. He could derail the ambition of BJP figurehead Narendra Modi to become prime minister, and possibly even hold the key to power in post-election manoeuvring to form a coalition government. (One month of 'AAP ki sarkar': The report card)

The trouble for Mr Kejriwal is that many doubt he can make the leap from populism and street politics to policies that would lift India's economic growth from its slowest clip in a decade.

In his first weeks in office, he slashed power and water prices, banned foreign supermarkets from setting up in the capital and led an unruly protest against the police.

"We will need time to see what policies they establish in a national manifesto," said Natasha Ebtehadj, a fund manager at Threadneedle Investments in London. "However, initial moves do seem to suggest that they will not be prioritising economic reform nor reducing the reliance on unproductive subsidies."

In an interview, Mr Kejriwal spelled out his economic priorities for the first time and said AAP would spur competition, simplify tax, reduce the role of government and make space for entrepreneurship to flourish.

"We have somehow put shackles on private enterprise, this needs to be removed. People need to be allowed to do business," he said at his cluttered apartment in Ghaziabad, a shabby satellite town of New Delhi far from the elegant streets preferred by most politicians in the heart of the capital.

The AAP's appeal is broad. Leaders from Apple Inc, Barclay's Capital and software services giant Infosys Ltd have all joined what they see as a revolution against the bribes and graft that are holding India back.

To convince investors it is a serious player, the AAP has set up a seven-member committee to forge a policy manifesto, including former RBS India CEO Meera Sanyal, former Idea Cellular Managing Director Sanjeev Aga and noted economists.

That platform is likely to seek foreign direct investment (FDI) in infrastructure and financial services, favour a nationwide goods and services tax to cut business costs and bring in a uniform taxation regime, two sources with direct knowledge of the policy discussions said.

"We are not against FDI per se, we are not saying that FDI should not be in any sector, this is a decision that has to be taken on a sector by sector basis," Mr Kejriwal said.

The party would not oppose partial privatisations, and it may suggest a roadmap to plug leakages in the delivery of subsidised grain, fuel and fertiliser, the sources said.

Mr Kejriwal is opposed, however, to the entrance of foreign supermarket chains such as Wal-Mart into India, arguing it would be damaging for local jobs and farmers. The Indian government has allowed entry of foreign retailers into the country but has left it to state governments to implement the policy.

Mr Kejriwal returned time and again in the interview to his mantra, fighting the rampant graft that sparked unprecedented protests and hunger strikes in 2011 and led to the creation of his party.

"Good economics is the outcome of honest politics," he said.

India was ranked 94th in a list of 177 countries on Transparency International's 2013 global corruption index, lower than China, South Africa and Brazil. The Congress party-led government has been rocked by spectacular corruption scandals, and foreign investors regularly complain about the need for "speed money" to get business done in the country.

One of Mr Kejriwal's first actions in government was to encourage citizens to use cellphones to record government workers who demand bribes, then call a hotline to report them. Businesses in Delhi say the effect has been dramatic, with far fewer demands for gifts and money.

BEDDING DOWN BY THE BARRICADES

Mr Kejriwal's AAP clearly has strong support in Delhi, but it is unclear how far its popularity extends.

Some supporters may have had second thoughts in recent days after the spectacle of Mr Kejriwal leading a street protest against the city police, who are controlled by the federal government, and bedding down for the night beside the barricades.

In the national election, AAP would field candidates against 73 members of parliament facing serious criminal charges and also stand against several cabinet ministers who had "engaged in corruption", Kejriwal said.

Some leaders have said the party is preparing to contest up to 400 of the 543 parliamentary seats at stake, though opinion polls conducted since the Delhi election suggest that - despite such ambitions - it is unlikely to win more than a dozen.

Nevertheless, support for the AAP across the country could yet grow, putting the party in a key and influential position if, as polls predict, there is a hung parliament and a coalition government has to be formed.

Mr Kejriwal said he is opposed to both the Congress and the BJP, but has accepted support from Congress in forming the government in Delhi.

The AAP's meteoric rise has already forced the main parties to adopt some of its anti-elite, anti-corruption language. Its crowd-pleasing Delhi policies have had a knock-on effect, with two states following Mr Kejriwal's cut in electricity prices. On Thursday, the Indian government increased subisides for domestic cooking gas, a move apparently aimed at AAP's core support base of urban voters.

G.R. Gopinath, an entrepreneur who founded India's first low-cost airline and recently joined the AAP, wrote in a blog that the party's rowdy edge could however erode support among the educated middle class whose funds and motivation helped it win in Delhi.

"AAP is in danger of being branded like other political parties of resorting to cheap and populist measures and opposing for the sake of opposing," he said.
© Thomson Reuters 2014
Comments
Arvind KejriwalAAP