New Delhi: The Delhi government has ordered a magisterial probe into the demolition of over 500 shanties during an anti-encroachment drive conducted by the Railway police in a west Delhi slum. One child is alleged to have died during the demolition while hundreds were left exposed to the cold.

Residents of the slum in west Delhi's Shakur Basti have alleged that their homes were demolished on Saturday without any warning or notice. The six-month-old girl, they claim, died when a piece of furniture fell on her while the shanties were being bulldozed.

The Railways has denied the charges. In a statement, it said a number of notices were issued asking residents to vacate the land where a new passenger terminal is proposed to be constructed. The statement says the girl died before the demolition drive began.

A railway spokesperson said the child died two hours before the demolition drive began. "It was an illegal encroachment. We were well within the law to demolish the shanties. The SHO Punjabi Bagh got a call at 10 am informing him about the child's death. The demolition drive took place after that. We should wait for post-mortem report," he said.

According to the police, the girl died after a heap of clothes fell on her. "When her family members were arranging clothes, a heap of garments fell over the child which they did not notice. The child got smothered under it. No case has been registered as of now," Joint Commissioner of Police (south west) Dependra Pathak said.

Delhi Chief Minister Arvind Kejriwal visited the area late last night. Condemning the incident, he said "This is highly condemnable. God will not forgive them. They (officers involved) should be booked for murder." His government has suspended three senior officials for failing to provide relief material to the residents. 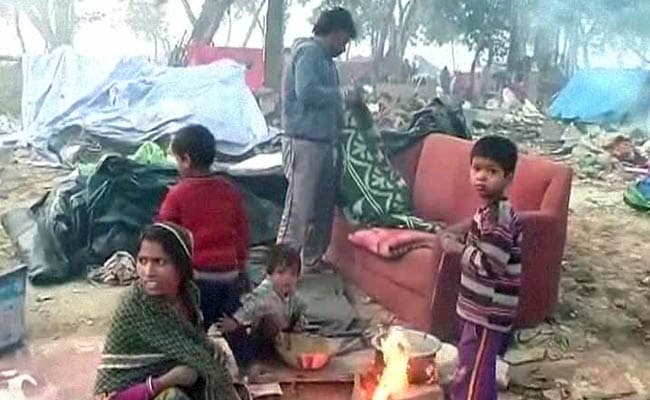 During his poll campaign, Mr Kejriwal had promised that his government would replace slums with permanent structures and would not raze a single home.

In another post, he questioned: "There are court orders to raze properties of some rich n politicians in Delhi. Those orders r never implemented (sic)."

The chief minister also said when he spoke to Union Railways Minister Suresh Prabhu, he said he was "not aware of operation. He this was also shocked."
Comments
encroacment driveslum razedhuts demolisheddemolition driveanti encroachment driveShakur BastiArvind Kejriwal slum demolition