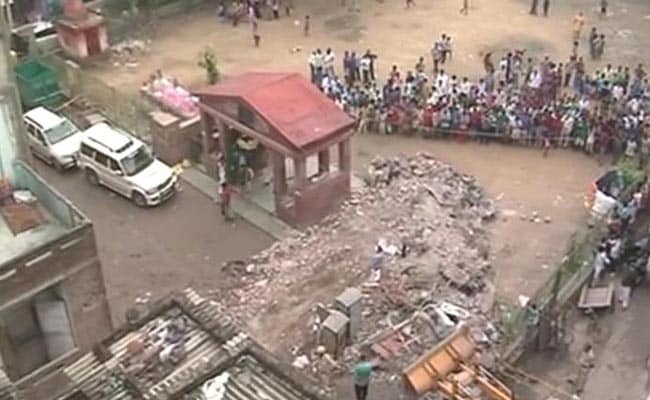 The operations to clear the debris are still going on at the site.

New Delhi: AAP government has ordered a magisterial probe into the collapse of a 4-storey building in Vishnu Garden area in west Delhi. Five people including a nine-year-old girl were killed in the accident on Saturday.

South Delhi Municipal Corporation or SDMC has suspended three engineers for alleged lapse of duty even as it maintained that "seepage in sewer line" made the foundation of the building "weak" leading to its collapse.

The body of the nine-year-old girl was pulled out of the debris today afternoon, while a 50-year-old man succumbed to his injuries earlier in the day.

Eight persons were injured in the incident, according to district administration.

While two of them have suffered minor injuries, six have been injured seriously, and four of them have been referred to Deen Dayal Upadhyay Hospital for further treatment, the SDMC said in statement.

"No one else is feared trapped in the debris now but the operation to clear the debris is still going on," a senior police officer said.

DCP (West Delhi) Pushpendra Kumar, said that an FIR "under Section 304 of IPC (causing death by negligence) has been registered against unknown persons in connection with the wall collapse".

Delhi government, which ordered an inquiry into the incident, accused the BJP-led SDMC of failing to ensure compliance with safety standards, charges denied by the civic body.

"People have told me that there was construction going on and the entire building has collapsed on one side," Delhi PWD Minister Satyendera Jain claimed.

"Whatever construction work was going on, MCD had full responsibility to stop it, which they should have done... the government has ordered an investigation, to be done by the DM of the area, and the report will be submitted within seven days," he said, adding, "strict action will be taken against the culprits".

According to SDMC, the building was 25 years old and "no buildings laws were violated" as alleged by AAP.

"A sewer line was laid in the area about it three months ago; seepage in it weakened the foundation of the building, which led to the collapse," a senior SDMC official claimed.

Senior BJP leader and South Delhi Mayor Subhash Arya, who visited the accident site this morning along with other senior officials of SDMC, countered the allegation and blamed the AAP MLAs over the incident.