13 Flights Diverted Out Of Delhi, Dozens Delayed Due To 'VIP Movement' 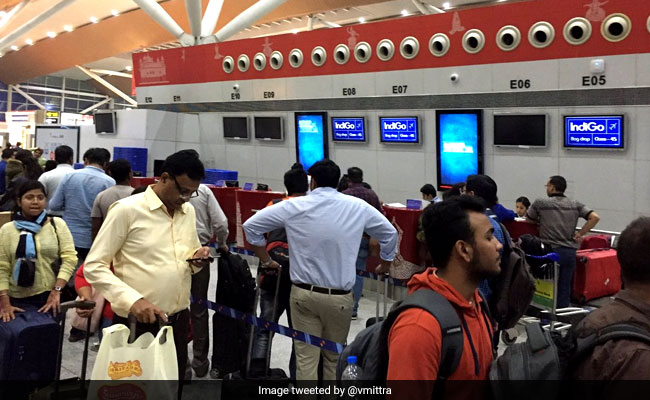 Flights were delayed at the Delhi Airport due to VIP movement.

New Delhi: At least 13 flights were diverted out of the New Delhi airport on Saturday evening due to movement of VIPs, news agency ANI reported quoting officials. At about 9 pm, the Delhi Airport's website showed nearly 90 domestic flights arriving at the Indira Gandhi International Airport had been delayed or diverted. By 10:30 pm, most of the delayed flights had landed.

Many flights were delayed for over an hour. One Jet Airways flight from Patna that was scheduled to land at 2:50 pm, eventually arrived at 8:59 pm - a delay of more than six hours.

"Due to air traffic congestion consequent to VVIP movement at #Delhi airport, some of our flights are affected," Jet Airways tweeted, requesting passengers to check their flight status before arriving at the airport. SpiceJet also issued a similar advisory. Airlines also warned passengers of congestion at the Mumbai airport.

A high frequency of VIP chartered planes landing at Delhi airport caused the delay, sources in the Delhi Air Traffic Control told ANI. A video tweeted by the news agency, showed long queues at the Terminal 1 which handles most domestic arrivals and departures.

Many people expressed their frustration on social media.

@Delhi_Airport.. You guys should have had more seating arrangements.. More than 50% of travelers including sr. Citizens are standing.

Delhi airport, which has three runways, is the busiest in the country and handles around 1,200 flight movements everyday. During peak time, the airport handles up to 70 flights per hour.
Comments
Delhi AirportFlight DelayIndira Gandhi International (IGI) airport