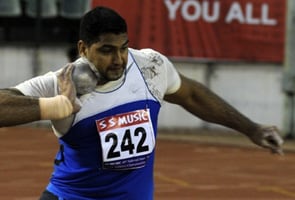 New Delhi: Only the third Indian shot putter to breach the 20m mark, Asian champion Om Prakash Singh is now aiming for a medal in the October Commonwealth Games after putting in a lot of hard work and praying for a little bit of luck.

Crowned Asian champion in November last year in China, the 23-year-old, who stands at an imposing six feet seven inches, wants to win gold in the October 3-14 Games in front of home crowd.

"I am shaping up well. I am confident, I will at least win a medal in Commonwealth Games. But my aim is to win gold, I can do it with a bit of luck," Om Prakash, who won gold with a throw of 19.74m in the just-concluded Asian All-Star Athletics Meet here, said.

Om Prakash, who is only the third Indian to break 20m mark apart from national record holder Shakti Singh (20.60m) and Bahadur Singh Sagoo (20.40m), understands shot put is one discipline which is tougher in the Commonwealth Games than in Asian Games.

"Competition is less in Asia but in Commonwealth Games it is tougher. Canada's Dylan Armstrong has 21.58m whereas my best in 20.02m. But I am hoping that I will improve my performance in Commonwealth Games and hopefully he (Armstrong) will go down a bit," said Om Prakash, who touched a season's best of 19.80m in Bangalore in June.

Besides Armstrong, Dorian Scott (20.55) of Jamaica is the only shot putter from a Commonwealth country to have crossed 20m this season.

Om Prakash said he will have to cross Shakti Singh's national record and throw the iron ball to at least 20.80m to win gold in the Commonwealth Games.

"In any case, one day I will be the national record holder. I am just into sixth year of my career and shot putters keep on improving their performance till late 30s and even 40s," he said.

If Om Prakash wins gold in the multi-sport event here, he will become the only second Indian athlete to win a gold in the Commonwealth Games after 'Flying Sikh' Milkha Singh who won the yellow metal in 1958.

The basketball-player-turned-shot-putter, who is now training in Finland, has some top competitions lined up in the run-up to the Commonwealth Games.

"I am going to participate in two events in Paris and London. Then I am hoping to get a chance to take part in the World Cup before the Commonwealth Games," said Om Prakash who is being sponsored by Olympic Gold Quest run by Geet Sethi, Prakash Pradukone and Viren Rasquinha.

Promoted
Listen to the latest songs, only on JioSaavn.com
Om Prakash switched to athletics six years ago and immediately became national junior champion in 2005. The next year he got his first international exposure at the World Junior championships in Beijing.

He won a silver medal in the Asian Indoor Championships at Doha in 2008 and won the Kunshan leg of the Asian Grand Prix meets last year before winning the Asian Championships gold in Guangzhou in November.
Comments
Commonwealth GamesCWGInterviewsShot putter Om Prakash Singh