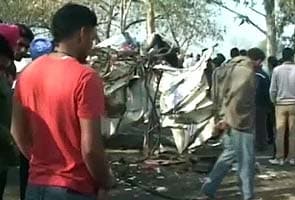 Jalandhar: 11 children have died after the school bus they were travelling in collided with a truck in village Gahir in Punjab's Jalandhar district this morning.

The driver of the school mini bus, which was carrying 24 students, all in the age group of 8-10 years, was also killed in the mishap, Jalandhar Range's Inspector General of Police Gurpreet Deo said.

Police says around ten others were injured and have been moved to a nearby hospital.

"Seven students died on the spot, four died in hospital. The driver of the bus also died... The accident happened around 8 am," said Rajinder Singh, Superintendent of Police (Rural).

The accident happened on a highway near Jalandhar when the bus, belonging to Akal Academy, was on its way to school. It collided head-on with the truck.

The impact of the accident was so bad that the roof of the school mini bus was torn off and the vehicle was virtually reduced to a heap of metal.

A case of rash and negligent driving was registered against the truck driver, who fled after the accident.

Jalandhar deputy Commissioner Shruti Singh announced a compensation of Rs 1 lakh to the next of kin of those who died and free medical aid to the injured.