Protests Continue In Shimla Over Schoolgirl's Rape And Murder

The protesters, led by Students' Federation of India (SFI) activists, assembled at the Central Telegraph Office and marched to the Ridge via the Mall Road, carrying placards demanding justice for the victim. 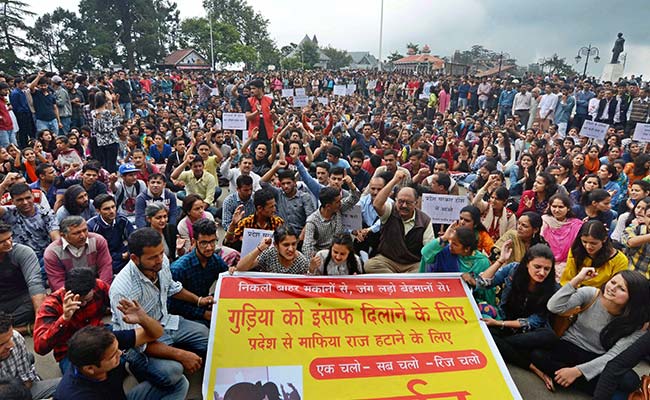 Shimla: Demonstrations continued in Shimla over the rape and murder of a school girl, with students today taking out a protest march over alleged "lapses" in the investigation, a day after the state government announced a CBI probe into the incident.

The protesters, led by Students' Federation of India (SFI) activists, assembled at the Central Telegraph Office and marched to the Ridge via the Mall Road, carrying placards demanding justice for the victim.

The SFI welcomed the decision of the state government of referring the case to CBI but expressed suspicion over role of the police.

Residents of Chamyana, in the outskirts of Shimla, also held protests over the incident.

The Congress also joined the clamour for justice for the victim. Himachal Pradesh Congress Committee (HPCC) president Sukhwinder Singh Sukhu said there certainly was some "negligence" in the police probe.

Yesterday, an irate mob went on a rampage at Theog, around 30 kilometres from the state capital.

The mob damaged government vehicles, laid siege to a police station and blocked the Hindustan-Tibet National Highway for hours demanding a CBI probe into the case.

The minor girl, a class X student, was allegedly raped and murdered at the Kotkhai area of Shimla district on July 4. The body of the victim was recovered from the nearby Halila forest two days later.

Himachal Pradesh Director General of Police (DGP) Somesh Goyal had earlier claimed to have solved the case with the arrest of all the six accused, but there were still doubts in the minds of some that the case was being hushed up by the police.

The mob alleged that the real culprits were not arrested as they belonged to influential families.

The mob allegedly roughed up the Shimla Superintendent of Police (SP), damaged his vehicle and those of the Sub- Divisional Magistrate (SDM), Theog and Station House Officer (SHO), Theog, who took shelter inside the police station to escape its fury.

Promoted
Listen to the latest songs, only on JioSaavn.com
Taking note of the sensitive nature of the case, the chief minister, who returned to the state capital yesterday after a two-day visit to Kullu, took stock of the situation and ordered a probe by the central agency into the case.