Large Protests in Uttar Pradesh After Cops Shot on Duty 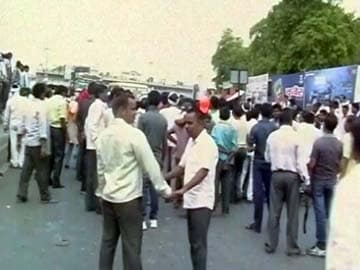 Firozabad, Uttar Pradesh: After two policemen were gunned down on duty in Uttar Pradesh, angry protesters today blocked a major highway in the district of Firozabad, 285 km from the state capital of Lucknow.

The constables were chasing six suspected robbers when they were shot. The suspects have not been tracked down yet.

One officer died immediately; the other died in hospital in Agra.

Dinesh Pratap Singh and Giriraj Kishore Gujjar, the killed policemen, were both in their early 30s.

In recent weeks, a series of horrific crimes - many of them against women - have left the Uttar Pradesh government defenseless against allegations of incompetence and a total breakdown of law and order.

More than two weeks ago, two  teen girls, were found hanging from a tree; medical reports showed they had been lynched and gang-raped. The girls were cousins; their families alleged that the police had refused at first to help them because they are from a lower caste.

Last week, a woman said she was gang-raped at a police station in Uttar Pradesh's Hamirpur district. Over the weekend, another woman said she had been gang-raped in Badaun; the suspects include a police officer's son who has still not been arrested.

Promoted
Listen to the latest songs, only on JioSaavn.com
The BJP's leaders in Uttar Pradesh have expressed their grave concern over a series of attacks on local leaders from their party. Three BJP representatives have been killed in the last few days.