Delhi traffic police has asked people to avoid areas that are water-logged to the the heavy rains. 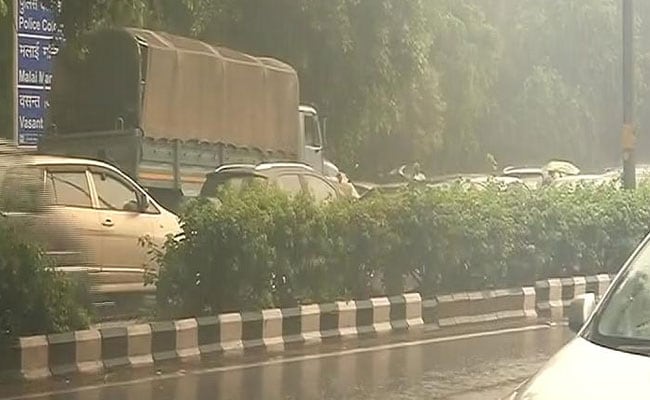 Heavy rainfall and water-logging were reported from several parts of Delhi.

New Delhi: Lightning and thunder ripped through the Delhi sky at about 1 pm  today along with incessant rain.

Traffic jams are being reported by the Delhi police from the Savitri flyover to Nehru Place in the southern part of the capital, as also at the Modi Mill U-turn near Okhla.

The Gurgaon police tweeted warning of congestion during office hours, but reassured that it's "on the job."

The minimum temperature in the capital settled at 26.6 degrees Celsius, normal for this time of the year.

After a long time it's pouring as it should be #delhi#rains#trafficpic.twitter.com/YgykLvw9m5

Light to moderate showers were recorded last evening as well in Delhi, Noida, Gurgaon and Faridabad.

Everyone going home. pl carry a water bottle, biscuits & patience. Car in front of u will not fly to the sky, so pl do not Honk #DelhiRainspic.twitter.com/yc2VNICiK9

The Safdarjung observatory of the weather department, figure of which is considered official for the city recorded 3.8 mm rainfall in the last 24 hours, said a Met department official.

The Met office has forecast light to moderate rains along with thundershowers during the day. "The maximum temperature is expected to hover around 33 degrees Celsius," the Met department said.

(With inputs from PTI)
Comments
Delhi RainMet departmentWeather In Delhi