Richa Roy aims to raise Rs 20 lakh for the idol makers in Asansol, Kulti, Barakar, Chittaranjan and Durgapur areas in the district over the next four-and-half months. She has raised Rs 40,000 so far on the crowdfunding platform ''Milaap''. 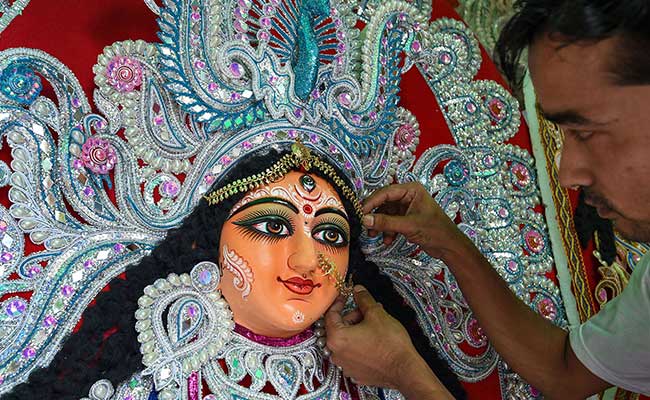 A clay artisan said he has never seen such a slump in orders in his 47 years in the business.

Moved by the plight of idol makers due to the COVID-19 pandemic, a 29-year-old woman in West Bengal's Asansol city has taken to crowdfunding to support 300 clay artisans in Paschim Barddhaman district.

Richa Roy aims to raise Rs 20 lakh for the idol makers in Asansol, Kulti, Barakar, Chittaranjan and Durgapur areas in the district over the next four-and-half months. She has raised Rs 40,000 so far on the crowdfunding platform ''Milaap''.

Ms Roy, who had completed her MBA last year, said she came to know about the plight of the clay artisans while ordering an idol herself.

"My friend and I had gone to a potters'' hub to order an idol but saw very few artisans and idols, unlike previous years. When we spoke to them, we were deeply moved by their condition. They have incurred losses of Rs 7-8 lakh this year," Ms Roy told PTI on Monday.

"We hope to reach out to people, especially Bengalis, across the world through ''Milaap'' to support the idol makers who have been silently making our Durga Puja beautiful for years," she added.

Srikrishna Pal, a clay artisan in Mohisila area of Asansol, said he has never seen such a slump in orders in his 47 years in the business.

"We have very little work even in this peak season, while in the previous years, we didn't get time even to eat or sleep," he said.

"Our regular customers have told us they cannot organise big pujas this year and have ordered smaller idols according to their budgets, which means our earnings have halved," Mr Pal added.

Another idol maker said the clay artisans have been severely hit by COVID-19 and many of them are passing days in anxiety till their idols are handed over to the puja committees that have ordered them.

The idol makers of the region also cater to demands from neighbouring Jharkhand and Bihar but they haven't received any orders this year, he said.

"As a crowdfunding platform, Milaap's purpose is to enable people to seek and receive help from individuals who wish to support them during critical times.

"Although the platform is mostly used for funding medical emergencies, we have, in recent times, come across some incredible fundraisers who had rendered help across West Bengal during the COVID-19 crisis and in the aftermath of Cyclone Amphan," Milaap CEO and co-founder Mayukh Choudhury said.