In the last six months, the Greater Chennai Corporation has built 150 km long stormwater drains, costing about Rs 700 crore. While this stopped inundation in several hotspots in the city, areas in northern and southern Chennai have collapsed. 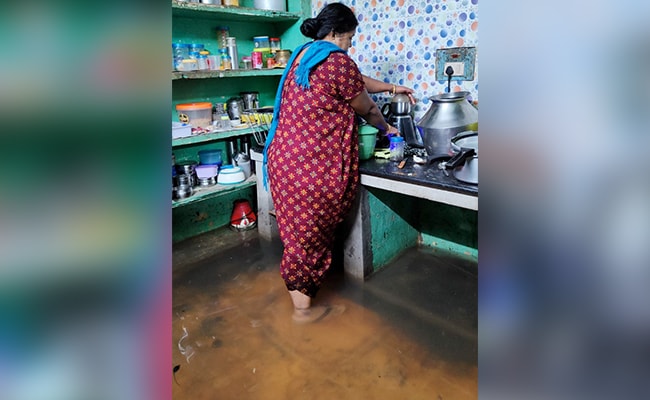 Parts of north Chennai remain inundated for the second day as the city received six times the average rainfall on Wednesday.

Most areas in Chennai, Kancheepuram, Tiruvallur, Chengelpet, and other northern districts including Vellore are likely to witness heavy to very heavy downpour in the coming days.

Bagavathi Vijaya, a resident, complained of water entering her house and ruining her furniture. "It's not just rainwater. It's also mixed with sewage, It's unhygienic," she added as she walked through ankle-deep water in her house.

Being a low-lying area close to a water body, which has over the years been encroached, residents say it is common for rainwater to enter their homes after heavy downpour. "There is no natural place for water to go now, but it has been this way for the last 40 years. We need a solution" said a resident.

At Koratur, water from an overflowing canal has flown into homes. Indira, a tailor who had lost her television and a two wheeler in floods last year is worried. "Waist-deep water entered our home last year. We had to take out a loan to repurchase things we lost in the floods. The water is not as high yet, but what if it swells? How will we survive?," she asked.

Jaysingh says his family had to take refuge at a relative's place as water inundated his home. "No elected leaders or officials have come here to see the situation, they are here when they want votes but nobody is here to make arrangements to pump out the water from out homes," he said.

While this stopped inundation in several hotspots in the city including T Nagar and Seethamal Colony, several pockets in the northern and southern parts collapsed.

Responding to this Chief Minister M K Stalin said " The AIADMK government has ruined Chennai and Tamil Nadu during its 10 years in power. It will take many years to fix their mistakes. However, we are confident that we will be able to fix it within a year and a half," he said.

Greater Chennai Corporation authorities say they are also working on a long term Rs 3,000 crore 750 km long storm water drains project, which when finished would fix these issues in northern and southern parts of Chennai as part of the River Kosasthalayar and Kovalam projects.

On Wednesday, 30 cm rain lashed parts of Chennai. Top officials see such extreme weather events as a clear fallout of climate change. " There has definitely been an impact of climate change in metropolitan cities including Chennai. Heavy rains have been rising in the last few days and this can be attributed to climate change over the years," said Gagandeep Singh Bedi, commissioner of the Greater Chennai Corporation.

3 Of A Family Die After Refrigerator Explodes In Chennai