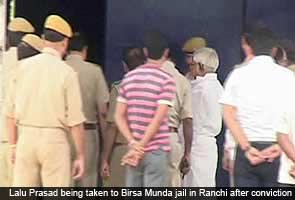 Lalu Prasad being taken to jail in Ranchi, Jharkhand, after his conviction in fodder scam

Ranchi, Jharkhand: Lalu Prasad has been jailed in Ranchi after a court this morning found him guilty of corruption when he was chief minister of Bihar. The conviction means he is disqualified as a member of parliament, according to a recent Supreme Court judgement.

Here are the 10 big developments on this story: