Elante Mall, Chandigarh and nearby buildings in Industrial Area, Phase 1 were searched by police units and the bomb disposal squad. 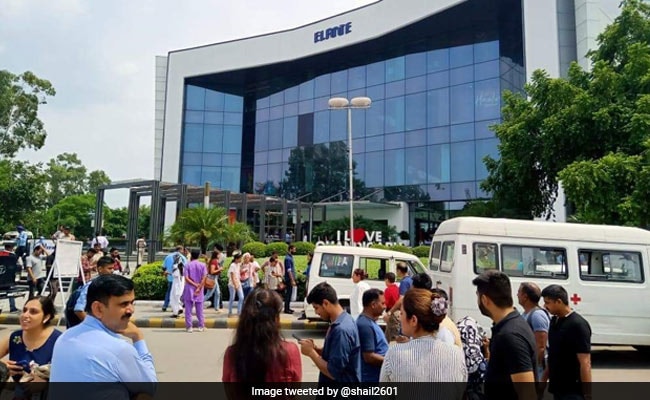 Chandigarh's Elante Mall is one of the largest shopping malls in India.

Elante Mall, a popular shopping mall in Chandigarh, was evacuated on Monday afternoon after the police received a call claiming that a bomb may have been planted in the building, news agency PTI reported, quoting a senior police official. With celebrations for Eid al-Adha or "Bakri Id" underway, the mall had many shoppers enjoying a public holiday.

Police units and the bomb disposal squad carried out searches at the Elante Mall and also in buildings nearby in Chandigarh's Industrial Area, Phase 1.

Chaotic scenes were reported at the Elante Mall, billed as one of India's largest, as panicked people started rushing out after mall authorities and the police used loudspeakers to ask them to leave the shopping complex.

Elante Mall Chandigarh evacuated due to threat of Bomb. pic.twitter.com/ke43CasFpL

"Chandigarh Police received a call that a bomb could have been placed in the Elante Mall premises," Deputy Superintendent of Police (East) Dilsher Singh told PTI.

He said the police quickly started evacuating the mall.

"We haven't found any explosive in the mall so far. However, a thorough search was going on. We are also trying to trace the person who made the call," the senior police officer told PTI.

Authorities have been on high alert across the country ahead of Independence Day on August 15 and in view of developments related to Jammu and Kashmir.

"Initially, I thought it was a mock drill by security personnel as Independence Day was near, but soon I realised that something serious had happened. I along with my family members, who had come to watch a movie, rushed out in panic," said Ajay Kumar, a local resident.

Senior police officials reached the site and appealed to people to stay calm.

With more than 11 lakh square feet of retail space, Elante Mall has more than 220 shops with a mix of domestic and international brands, and restaurants. It also has an entertainment zone with a multiplex and a food court.