Reporting A Cyclone For First Time, From The Site Of Landfall

Cyclone - a familiar term in the eastern part of the country but for a reporter in Mumbai, an unknown. We, Mumbai reporters, are used to covering heavy rain, unrelenting rain, rain that floods entire cities. Rain packaged with strong winds is an entirely different phenomenon.

When I was asked to report from Alibaug, a popular tourist draw about 100 km from Mumbai, I had mixed emotions. The organisation was trusting me enough to send me to the very site of Cyclone Nisarga's landfall. Ground Zero, so to speak.

Team NDTV - my cameraman, our driver and I -- reached Alibaug beach at around 5:30 am on Wednesday and found everything... calm. No wind, no unusual wave, not a single leaf moving.

Maybe this is what they call the calm before the storm.

Eventually it was daybreak and our work started.

The high tide was around 10 am, around three hours before the expected landfall. A drizzle, then waves started crashing into the shore, each higher than the last. The wind picked up. My cameraperson Pravin, who had covered a cyclone before, guessed the speed was around 20-25 kmph, not so powerful. Yet. 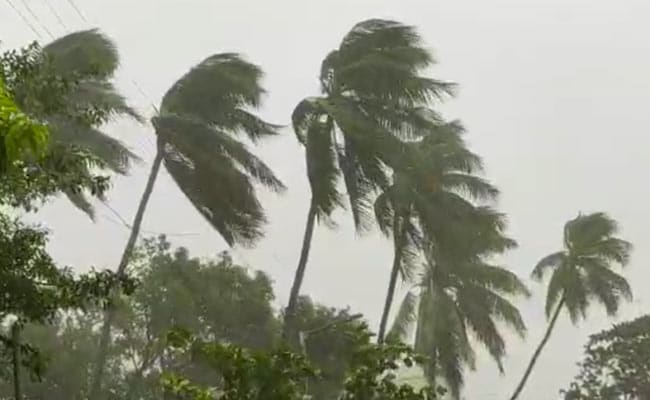 The trees around the beach, mostly coconut trees, started swaying violently in the wind, by now howling.

Suddenly, a horse came running from the other end of the shore. It was bridled, suggesting it was not a stray. A pack of 7-8 dogs followed. Animals sense changes in nature and I saw it myself. Soon, the birds started chirping wildly, as if to warn us.

The wind turned into gusts and it started pouring. The face mask that I was wearing as a precaution against the coronavirus (couldn't forget precautions for the pandemic) was drenched.

The wind started roaring in our ears. Our cellular network became more and more patchy and the live unit started breaking down.

The cyclone would hit the coast between 12.30 and 1 pm, the Indian Meteorological Department reported.

As we approached the hour, it became difficult to stand rooted to the spot. The wind was now at 100 kmph, pushing me in all directions like I was a ragdoll. Gravity and other laws of physics suddenly became more real than just textbook terms.

The trees around the beach, mostly coconut trees, started swaying violently in the wind, by now howling. Some loose branches started falling off. The road to the beach was soon filled with water and fallen leaves. Coconuts and mangoes were scattered all around. Alibaug beach had gone Eastman colour.

As we headed to our car, I felt pulled towards the sea by the winds. It took all my strength to walk ahead. Driving through the quaint little town, we saw giant trees uprooted, blocking roads.

A tin roof was ripped off a building and came flying at us but was snagged by an electricity pole.

The storm lasted three hours. Our SUV rattled and the wind banged at our glass windows.

After what seemed to us like hours, the rain stopped and so did the wind.

But the storm left its mark. Electric wires were snapped, causing power outage. Communication towers had to be restored. Near the coast, roofs had been blown away or trees had crashed on them.

A big blessing was that because of low tide, Alibaug was spared flooding.

We started back for Mumbai late in the evening.

I was now one cyclone old - rare for a Mumbaikar.

When A Pregnant Elephant Dies After Days In Agony