My Mother's Place Of Escape Is Patel Brothers, Indian Grocery In US

My mom's bucket list doesn't include lavish trips to far-flung locales like Bora Bora or Peru. Instead, it stars a grocery store - more specifically, a Patel Brothers location in Naperville, Illinois. She has heard rumors of its size, including one particularly egregious claim that it's as big as a football stadium. (Most people agree that it's as large as any beloved Midwestern supermarket, which is rare for an Indian grocery store in the States.) Every time she speaks about it, her eyes become wide and animated, as if she is running through the aisles in her mind. Recently, upon hearing that one of my friends is from Naperville, she asked him a million questions, not about his childhood or career, but about the Patel Brothers. Is it really that big? Is it really busy? Is it really as nice as everyone says?

It's unfathomable to her that such a place could exist.

She arrived in the United States from India in the early 1980s, armed with a jet-black braid that fell down her back, dreams of dental school, and an adamantine sense of determination. It was the first time she had been on a plane, the first time away from the comforts of home. Gone was the man who delivered fresh milk to the door in thick glass bottles, and the vegetable seller who roamed the streets of her neighborhood shouting out his selections for the day. As she and my dad settled in a small, barren apartment in Detroit, armed with just a sleeping bag and a radio, there was only one place to find the flavors of home: A tiny, dimly lit Patel Brothers that was as well stocked as it could be. Still, she was thankful. There she could find mounds of jaggery; bags of crispy, salty sev; and pounds of whole wheat atta for making rotis. It meant she wouldn't have to warm up limp grocery store pita and pretend it was naan or live only off the one American dish she did like: Bean tostadas at Taco Bell. 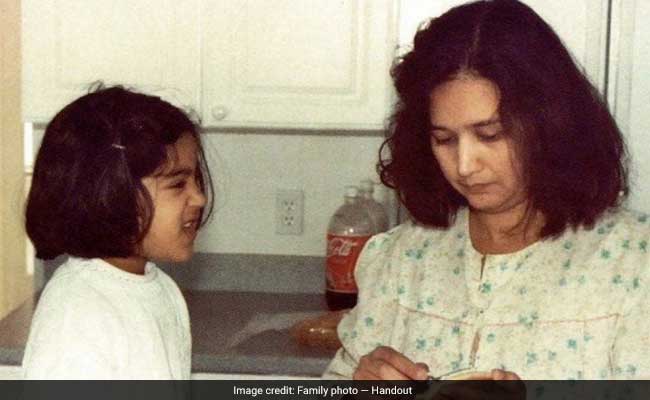 The author with her mother in Michigan in 1994.

Patel Brothers was started in 1974 by Mafat and Tulsi Patel. What was once a small grocery on Devon Avenue in Chicago has grown into more than 50 locations in 19 states. No Indian grocery store chain offers the same expansive selection of fresh produce, boxed spices, Indian beauty products and thousands of other items from the Indian subcontinent that were once smuggled back to the States in suitcases. Some have even begun to offer fresh, hot food, such as flavor-packed kati rolls. Most locations now feature the same fluorescent lighting and neat organization of a Whole Foods, but with burlap bags of basmati rice instead of boxes of quinoa, and a freezer full of paneer instead of a cheese counter.

Just as Patel Brothers has evolved, so has my mom. She is no longer an immigrant fresh off the plane, trying to adjust to a new home thousands of miles from everything and everyone she knew. She owns a thriving dental practice that she built tooth-by-tooth. Her English features a robust vocabulary dotted with a soft accent. She likes one more item at Taco Bell (a soft taco with beans), and she has developed an inexplicable penchant for candy corn. At her local supermarket, she picks up bottles of ranch dressing and peruses the bulk bins for grains and nuts.

Grocery shopping is usually a chore, one she does out of a strong distaste for restaurant food and an even stronger drive to feed my dad, my brother and me a mind-blowing range of high-quality home-cooked Indian meals. At Patel Brothers, memories of her childhood flood back to her brain and her taste buds. 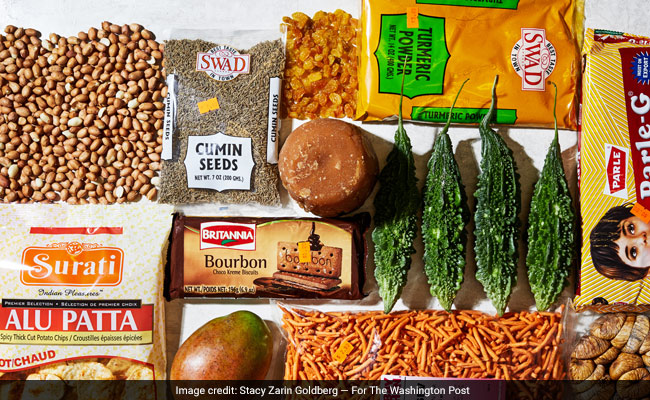 In the produce section, she always excitedly points out the plump and craggy karela, filling the thin plastic bag to the top. Same for the okra - she swears Indian grocery stores always carry better okra - and mango, which she buys 12 at a time during peak season. On the rare days Patel Brothers stocks fresh sitafal, a fruit she reminisces about more than any other, it's game over. On the aisle brimming with bags of lentils and flours, she pauses often to explain the favorite ways her mom and her neighbors would use them. On the spice aisle, she buys bags of dried bay leaves, bright yellow turmeric, jet black mustard seeds and hing, or asafetida, the pungent spice that gives certain Indian dishes their signature zing. Then she'd pick up Indian peanuts, raisins and figs - all of which she swears have more flavor than the American versions.

Like many fellow immigrants, my mom has not lost her sense of frugality, even as she has become more financially stable. She still buys clothes only off the sale rack and collects Bed Bath & Beyond coupons like they are Pokemon cards. But at Patel Brothers, she throws caution to the wind. Nothing feels off-limits, a rare boon to me and my brother when we were growing up. A new snack mix I want to try? I could get it. A tin brimming with saffron? Sure. Packets of Maggi Noodles, India's answer to Top Ramen, bags of India-exclusive flavors of potato chips, chocolate bourbon biscuits and Parle-G cookies all go in the cart. Argue for the same cookie leniency in an American grocery store, and we'd get a firm no and a stern look.

Perhaps her desire for her children to engage in their heritage overrides her desire for us to eat more fruits and vegetables. Or maybe Patel Brothers is just where she's truly comfortable.

I've always had my feet firmly planted in two worlds: I am Indian and I am American. I am fully Indian American. I am just as comfortable among stacks of pepperoni pizzas and platters of Salisbury steaks as I am piles of samosas and biryani. My mom cannot say the same. Though she is an American citizen, she is part of a small but mighty class of immigrants who have lived in their chosen country longer than their homeland. On visits back, roads that once felt familiar now feel like an alien planet, and merchants at the market instantly peg her for an NRI (a nonresident Indian). She exists in a Venn diagram of never quite belonging.

While she prefers many things about life in America, certain aspects she will never be able to adjust to. She was raised in a Jain household, a religion built on the idea of Ahimsa, or nonviolence. This strict code of vegetarianism is instilled deep within the fibers of her being. To this day, going to the regular grocery store means engaging in a choreographed route that lets her dodge the seafood counter. She speeds through the meat aisle, refusing to look up from her cart, wrinkling her nose the whole time. She must constantly compromise on her beliefs to just walk through the world.

Patel Brothers never asks her to be anyone except who she is. The store carries no meat, meaning my mom can breathe deeply. Every aisle is open to her. Conversations with staff can take place in an easy blend of English and Gujarati or Hindi, her now preferred method of conversation. It's possible to say, "Where is the jeeru?" and get an answer. At Whole Foods, she must remember to ask for cumin. At Patel Brothers, they know what besan is, and they carry the right brands of basmati rice, the kind that smells sweet and starchy. The freezers are packed with ice cream in the flavors Ben & Jerry's will probably never make, such as kaju pista, or cashew pistachio. Staff understand that she buys Bisquick not to make pancakes but to make gulab jamun. That she wants India's flavors with America's conveniences. That she wants to remember her original home while living in her chosen home.

It may seem silly to plan a trip centered around a grocery store, but I hope to take my mom to Naperville this year. There are so few spaces in the world where we can uncompromisingly be ourselves. And if she is able to do so, between aisles of frozen parathas and boxes of spice mixes, I will be there, filling up the cart beside her.

(Khushbu Shah is a food writer)