As Kids, I Showed Her Around School. This Week, My Sister Died

Keep smiling Pinky, wherever you are! Even in your last moments, when the pain was killing you, you smiled. We were tense, you were not; we were down, you upbeat. Just when the doctors said, "Any time now, you will die" due to your falling blood pressure, erratic pulse and low oxygen saturation, you kept pulling on with tremendous courage. You stunned with your indomitable spirit. You refused to die before dying. You gave a tough fight to cancer and emerged stronger with every new setback after you were handed the last (4th) stage sentence and given slim chances for survival. Maximum two months, some said. But, you proved them all wrong. Cancer finally killed you yesterday, but not without you battling it with all you had for over two years.

Pinky, three years younger than me, was the most lively, affectionate and compassionate person I know. I don't remember my first school friend. But my sister was definitely my first friend in life. On her first day at school, I felt a great sense of responsibility in holding her hand and guiding her to the school bus and then to her classroom. We played pranks together. I remember everybody at home went frantic after the two of us ran away with the glasses of a sleeping grandfather and hid ourselves under a bed.

As we grew up, so did our bond. When in 2002, I was shot in the head in my office during my initial days as a reporter and struggling for life, Pinky became a pillar of support. She discontinued her studies and all other engagements during that time just to be with me, to encourage me to live on. She ensured that I looked 'good' by often washing my partially paralysed face; she was by my side as I recuperated and earned the lovely sobriquet of being my 'SPO' (Special Police Officer) in the family.

Then, her wedding four years ago. What a great day it was. And when her son Taha was born days before the floods ravaged Kashmir in September 2014, we managed to boat the baby and her to safety. Later, she told me that when the waters were rising around the first floor of her house and the chances of survival were dipping, "I was sure you will do something to help rescue little Taha." During the last one year, as the media industry surged into upheaval with reports of lay-offs and redundancies, in my chats with her, she always bucked me up: "You cannot become a stopgap, you can do far better". 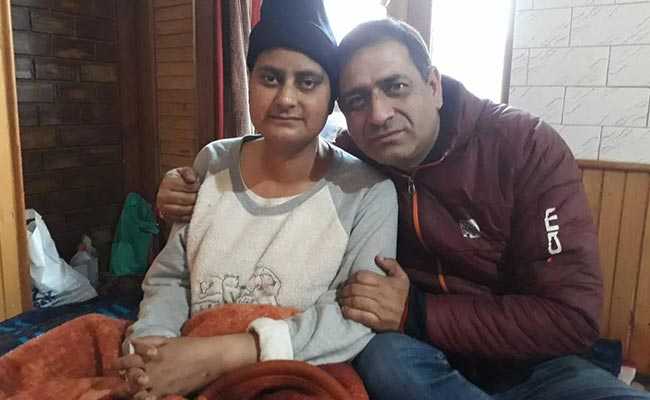 With my sister, Pinky, a week before she lost her battle to cancer

She showed the same enthusiasm in tackling her cancer. I always saw her discussing the minutest details about the disease with her doctors and trying to find a way to better her chances. Her faith increased. A couple of months ago, she asked me, "Why don't you pray?" I said, "God doesn't listen". She just smiled. And then the heavens fell when we were told to be prepared for the inevitable - Pinky's death.

Doctors said this was the most aggressive, non-responsive strain of cancer (triple negative). It had spread in her breast, bones and lymph. A surgery, two years ago, followed by cycles of chemotherapy probably halted the march of the disease - PET scan after PET scan showed marked improvement giving new hope. She started daily walks for hours to boost her stamina and her immunity. And suddenly, all of us started gathering knowledge about cancer, looking for anti-cancer organic stuff like broccoli, beetroot and wheatgrass.

What followed: second opinions of doctors and rounds of many cancer centres, hoping against hope that somebody will come up with some magic formula. There was relief when she improved briefly in 2017. But then the cancer struck back most virulently, this time in her brain. Tumours against which radiotherapy couldn't do much. "Now the countdown has started", she said, but also made an epic resolve: "my last cell will fight the disease."

During her final stint in a hospital ICU, she suddenly slipped into a coma followed by a cardiac arrest. As we helplessly watched her sink, praying for a miracle, reading scriptures by her side and jostling for those life-saving non-adrenaline shots to boost her blood pressure one last time, she was there lying still, completely peaceful, like in some higher state of meditation exuding pure consciousness. When the doctors gave up on her completely and the whole effort just reduced to helping her go peacefully, she showed flashes of comebacks, defying heavy-dose sedation. Our eyes firmly set on the hospital monitor, watching the heart beat and blood pressure fluctuations and hoping for a recovery: those were the most stressful times; the nights seemed too long; each minute looked like it was her last moment, when, in fact, she wanted to live.

I am proud of you, Pinky. For never abandoning your courage, your strength, your will. We are all proud of you. You rest now, if you want. You have earned it.

Disclaimer: The opinions expressed within this article are the personal opinions of the author. The facts and opinions appearing in the article do not reflect the views of NDTV and NDTV does not assume any responsibility or liability for the same.
Comments
Losing a loved oneCancerDeath in family