In Delhi's Air Pollution Emergency, What Changed And What Didn't

Delhi has officially declared a "public health emergency" over its air pollution. Technically, this means when levels of PM 2.5, microscopic, lethal, toxic particles, rise and stay above 300 micrograms per cubic meter. But in a major move, authorities thankfully cut the red-tape and closed schools for four days. According to GRAP, the Graded Action Response Plan, they should have first waited for 48 hours of PM 2.5 above the 300 level and then considered shutting schools.

However, as anyone who's breathed Delhi's air in the last couple of weeks knows it's been terrible thanks to their internal monitors - itchy eyes, runny nose, headaches, perhaps even asthmatic attacks in some cases. And this holds true for outside Delhi's borders too for a radius of over a hundred kilometres.

Declaring a "public health emergency" in Delhi and its neighbouring area is unprecedented. However, doctors like Dr Arvind Kumar of Lung Care Foundation, have been demanding this for some time now.

But why does the public at large really need such a rude wake-up call every year at this time? Scientists and experts have been essentially saying an emergency response is all very well but this needs to be addressed year round. Here's where the crisis is at (and dare one say will be at a year from now too):

1. In India, 136 deaths every hour are linked to air pollution.

3. Ruling politicians of both BJP and AAP, ahead of Delhi's assembly elections, have (selectively?) quoted data to show that air pollution has come down which experts have debunked. Doctors say a minor dip doesn't lower the health risks much. For that, levels have to fall drastically.

4. PM 2.5 pollutants are toxic and so small that these beat the body's defences and settle deep into lungs from where these spread to the bloodstream and other organs causing inflammation and are linked to asthmatic attacks, strokes, heart attacks, even dementia. 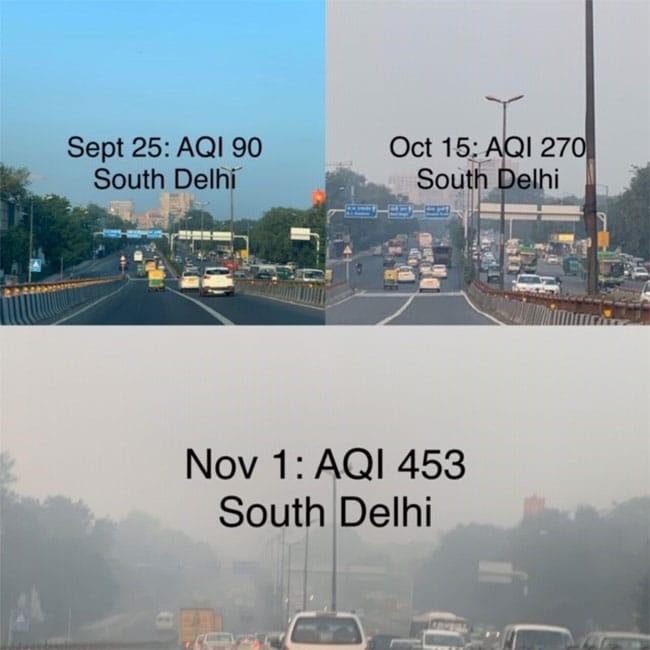 6. Another comparison: When air pollution surged in California, schools were closed, public transport was made free, shelters were opened and top sports events were cancelled. No such awareness or response in India. Declaring an unprecedented public health emergency in the Delhi region will hopefully mark a change. Bangkok is way ahead - it closed over 400 schools last summer when air pollution worsened to an AQI of (just!) 160-170.

7. India has the dubious recognition of having 12 of the top 15 cities, 15 in the top 20 globally with the worst air pollution.

8. Farmers will continue to burn stubble because it is cheaper for them and their earning margins are already very tight. They cannot be held accountable for air pollution, instead they need help. If anything, it's a failure of the Punjab, Haryana, UP and even AAP governments for not preventing these fires year after year.

9. But are farmers, and even firecrackers, really to blame for Delhi's air crisis? Yes, if viewing this short period of a couple of weeks, but no, if one considers the whole year. In fact, studies broadly indicate that more than half of Delhi-NCR's PM 2.5 pollution is emitted from vehicles mainly, as well as industries and road dust. Bio-mass burning which includes the farm fires is at most about 10%, and this is only in one of four apportionment reports.

But it's not just a Delhi problem, it's not even a north India problem. Places like Singrauli are in the rural, coal hinterland and their air pollution crises rarely makes it to the headlines. Politics over air pollution is absurd. Politicians, in this case specially, should pay heed to the science. Even they acknowledge it's a bipartisan issue but couch it in their sniping rhetoric. True, there have been some changes but not nearly enough to cut emissions at source i.e. address the problem, not rely on band-aids.

The problem is if laws, rules and policy don't change, a few hundred million people will suffer; 1.2 million are estimated to have died in one year alone.