A Week Before US Polls, The 3 Possible Outcomes

Next week today we could be looking at a Biden landslide, a Trump squeak-through or complete confusion as many states with close contests will still be counting their votes into the next weekend. Everything could boil down to a few hundred thousand votes as it did in 2016. And the confusion could still throw up either result, or more probably end up in a series of court battles, state by state, to the Supreme Court; which as of now has a huge Trump majority.

So why are we here when all the polls show Joe Biden well ahead (7% average) in almost every single opinion poll nationally? Even the so-called pro-Republican pollsters like Rasmussen have Biden leading Trump nationally by 2%. The problem is partly polling and partly quintessentially American.

Everyone knows that opinion polls in 2016 missed the bus. They forgot that there were non-college educated whites in key blue (Democrat) states who voted for Trump. Pollsters claim they have corrected that bias, but obviously Democrats don't believe the messenger and are still exhorting their supporters to ignore the polls and get the vote out. And that they seem to have done.

With more than 70 million votes cast already - more than half the votes in 2016 - America is looking at a record turnout maybe reaching 150 mn. In this early turnout, states that report voting by registered party show that Democrats are out in strength.

That said, as early in-person voting has started in many states, Republicans are playing catch-up and in battleground states like Florida and North Carolina, have reduced the Democrat lead by half; similar to what happened in 2016. Also the numbers are only for states reporting party affiliations and California, the giant Democrat bastion, skews the numbers in their favour. There is another caveat - the early voting in 2016 wasn't as high, so the Republicans catching up could be trickier and could depend on the vagaries of the weather on Election Day Nov 3.

The other little trend is that Trump has slowly whittled the lead that Biden had in Battleground states since end-July, similar to happened in 2016, when Hillary Clinton looked to be ahead in all these states, only to lose them. 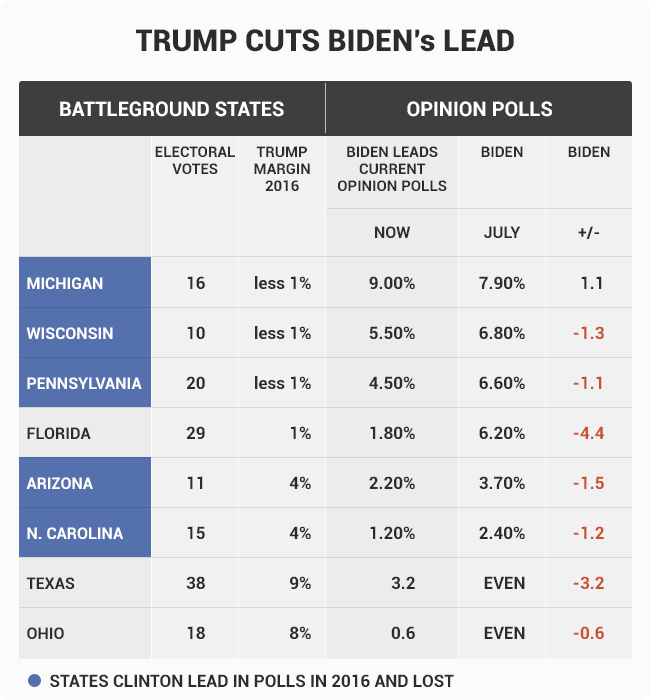 Here is where the American election system makes votes unequal. Only 10 states really matter; all the others are known party states; with the Democrats holding the North East and West Coast, and Republicans most of continental USA. 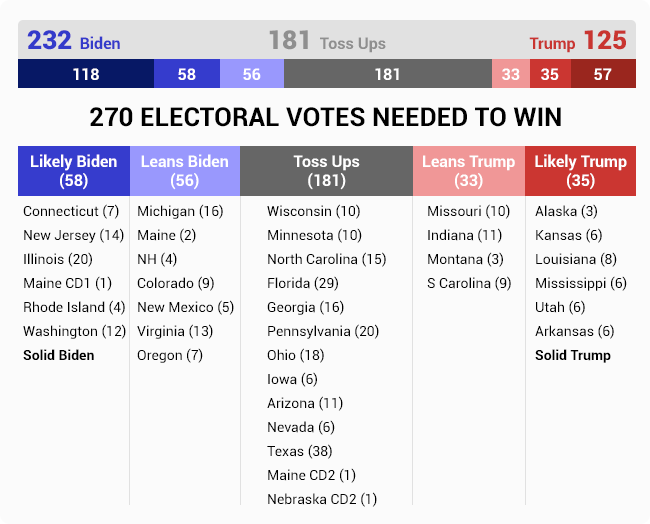 This RCP graphic clearly depicts the issue: Biden is sitting where Clinton ended up (if we forget electors who reneged later) at 232 votes and needs just 38 to become President and he could get there by winning any combination of states. 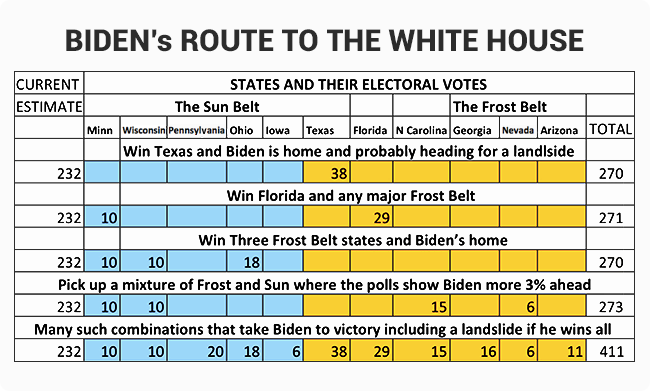 But remember Clinton was almost here as well four years ago.

For Trump the road is much more difficult. He can't afford to lose many of the toss up states. Simply put, he has 125 in the bag (the general consensus) and so needs a minimum 145 of the 181 toss ups. Which is why he has to hold almost every state he won last time. 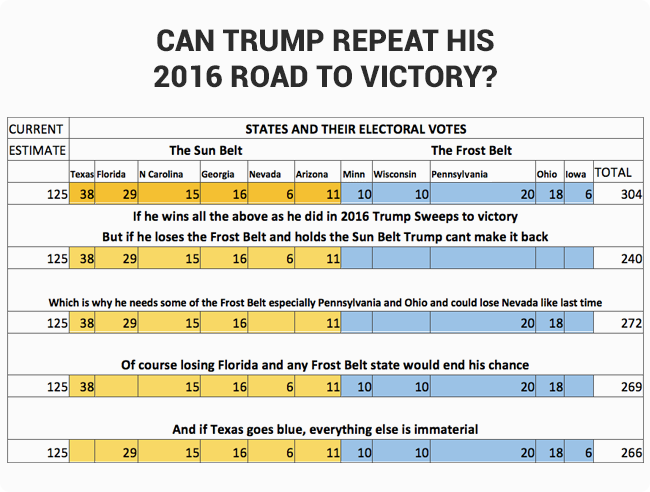 Which is why there is so much interest in North Carolina:

2. Democrats lead Republicans 40% to 31%, with 29% other and unaffiliated but the lead has been narrowing.

That is a huge number in a state won by Trump by 3%. Much of this is due to the large migration into the state of Yankees, who tend to be more liberal than the locals. Could they swing the state that voted for Obama in 2008 but not in 2012?

Similarly in Florida, a state that, along with Ohio, enjoys the reputation of selecting the winner almost every time since the Second World War, two divergent trends appear. Republicans have narrowed the voter registration gap substantially in the last year, but polls suggest Trump lost support among senior citizen who are disappointed by his handling of Covid. Early turnout is at 67% of 2016.

Democratic lead again has narrowed, but could the Republicans have left it too late? Early voting closes in 3 days.

The fright of 2016 will keep Democrats awake for another week, and no amount of telling them that the polls have improved, that Biden's lead has been longer and steadier than Clinton's will calm their fears. For now the predictions by pundits is all Biden. 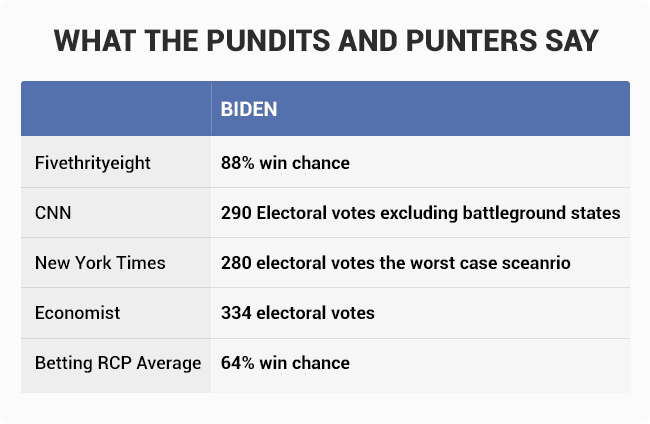 So has Trump "Biden off" more than he can chew? Probably. But if states are won by small numbers, the Republicans are prepared to challenge every single narrow margin in the courts. And that is the real concern; Biden needs to be over 300 electoral votes at least to feel confident that courts will not overturn his victory by invalidating votes.

This week's swearing-in of Amy Barrett has only added to the Republican majority in the Supreme Court, which could be the final deciding vote and so adds to the Democrats' concern. Already Supreme Court Judge Brett Kavanaugh, in his judgment supporting the 5-3 verdict against Wisconsin extending its date to receive postal ballots, sent a warning to State Courts when he wrote, "Under the US Constitution, the state courts do not have a blank check to rewrite state election laws for federal elections".

And finally, Democrats are aware that it was Kavanaugh, Barret and Chief Justice John Roberts who fought the Bush Florida case in 2000, which got him the Presidency on 340 votes.

Our Obsession With KYCs And OTPs Are Simply MCDI. Get It?