On Day 1 of Bihar Polls, a Name Surfaces for NDA Chief Minister 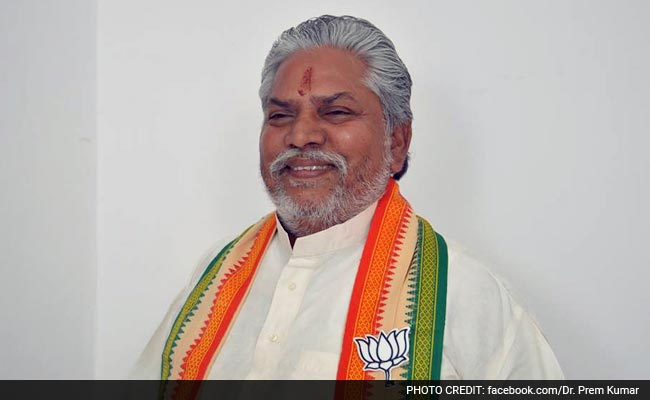 Dr Prem Kumar is regarded as the BJP's face for the EBCs - the economically backward classes -- in Bihar.

Patna: As the first of the five-phase elections in Bihar started, BJP's star campaigner Shanawaz Hussain said today that the party's veteran lawmaker from Gaya, Dr Prem Kumar, will be the chief minister if the NDA comes to power in the state. The statement was a departure from tradition for the party, which rarely announces its chief ministerial candidate in advance.

Mr Hussain made the announcement at the party's campaign meeting in Gaya.

"I request you to vote in large numbers and return your legislator Prem Kumar, who will be the Chief Ministerial candidate for the state. He will be the chief minister of the state if the NDA comes to power," said Mr Hussain, a senior leader and former Union minister of the party.

The BJP, which is trying to add Bihar to its kitty, had not announced a chief ministerial candidate for the state. The party has so far been campaigning on the development plank of Prime Minister Narendra Modi.

Even during the state elections in Jharkhand, Haryana and Maharashtra - where the BJP won with an overwhelming majority -- the chief ministerial candidate was announced only when the results were declared. In Bihar, reports indicate a neck and neck contest between the NDA and the Nitish Kumar-led grand alliance.

Dr Kumar, a six-time legislator from Gaya, has already been launched by his supporters as an aspirant for the top job on social networking sites. He is regarded as the party's face for the EBCs - the Extremely Backward Castes - which form a chunk of voters in the state.

Supporters say Mr Kumar's candidature can dovetail with the development plank of PM Modi. But reports in the run-up to the elections said his competitors for the top post included a few other key leaders including former deputy chief minister Sushil Kumar Modi.

On Saturday, Mr Kumar -- who is pitching for his third term as the chief minister, had taken a dig at the BJP for not projecting anyone as its Chief Ministerial candidate.

"Even today they have no candidate for the CM's post. They keep saying we are contesting the elections under Modiji. They have no leader," he had said. "The way in which the PM is holding rallies in Bihar, it seems there is such a dearth of leadership in the BJP."