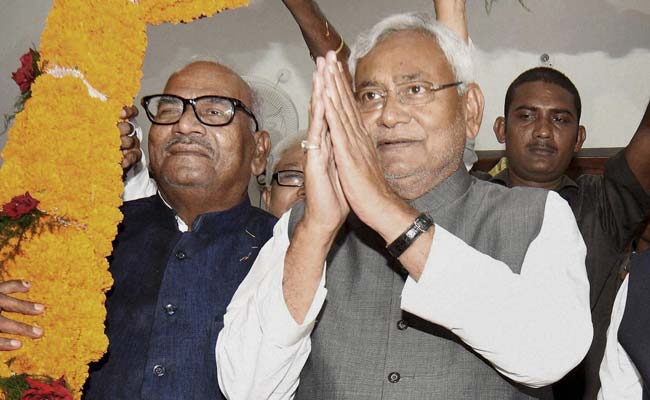 Nitish Kumar will be sworn in as Chief Minister of Bihar today. (PTI Photo)

Patna: An array of personalities, mostly from the non-BJP block, that could indicate possible future political alignments, will be present at the swearing in ceremony of Nitish Kumar, who is set to take over as Chief Minister for the third straight term today.

The stage is set for the ceremony at the Gandhi Maidan in Patna that will be attended among others by ally Congress vice-president Rahul Gandhi, former prime minister HD Deve Gowda, NCP chief Sharad Pawar, National Conference leader Farooq Abdullah and Congress leaders in Lok Sabha and Rajya Sabha Mallikarjun Kharge and Ghulam Nabi Azad.

Prime Minister Narendra Modi, who did an aggressive campaign against Nitish Kumar-Lalu Prasad combine during the elections, was invited by the chief minister to attend the function. But he will not be present and has instead deputed Union Ministers Venkaiah Naidu and Rajiv Pratap Rudy.

Mr Prasad, who jointly steered the JD(U)-RJD-Congress combine to a stunning victory, will be present tomorrow along as well as JD(U) president Sharad Yadav.

CPI(M) general secretary Sitaram Yechury, D Raja of CPI, whose parties contested against the JD(U) led combine and but are anti-BJP in nature, and MK Stalin of the DMK have also confirmed their participation.

A notable presence will be that of BJP ally Shiv Sena, which has accepted the invitation and decided to send two Maharashtra Ministers Ram Das Kadam and Subhash Desai to the function. Sena chief Uddhav Thackeray himself was invited by Mr Kumar but he has expressed his inability to attend the ceremony.

President of Rashtriya Lok Dal Ajit Singh and former Union minister and NCP leader Praful Patel would also be present on the occasion.

Abhay Chautala of the INLD, BBM leader Prakash Ambedkar, eminent lawyer Ram Jethmalani, Raj Babbar and HK Dua are among the confirmed guests in the list.

Along with these guests from across the country, RJD chief Lalu Prasad and his JD(U) counterpart Sharad Yadav would also be present at the ceremony.

With top political leaders from different parties being present, there was speculation about the political realignment in future. But JD(U) general secretary KC Tyagi said there was no need to see politics in the oath ceremony. Inviting guests at a function was part of healthy political etiquette.

The Chief Minister's Office said that high tea would be held for VVIPs at the official residence of the chief minister after the oath function.

Mr Kumar, who is giving a personal touch to the arrangements for the oath function as also the tea party at his residence, CMO officials said.

All arrangements have been made for the function at the Gandhi Maidan at 2 pm, Patna Divisional Commissioner Anand Kishore, who is supervising the arrangements, said.

Mr Kishore said considering arrival of so many VIPs, more than 2,000 security personnel would be deployed at the venue.

Two canopy shaped dais had been prepared for VVIPs and those under SPG cover. In the main dais, Mr Nitish Kumar, his new sets of ministers and VVIPs would sit.

In the adjacent dais, all newly elected MLAs would be accommodated.

There would be a separate gallery for women who would be coming to attend the ceremony, he said.