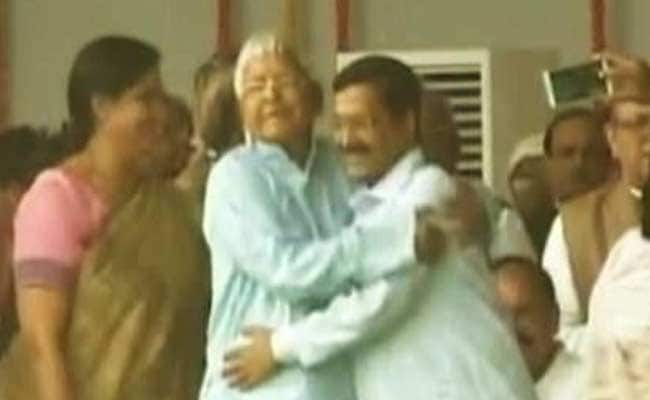 Mr Yadav, who was expelled from AAP, said it was not mere hugging, but the defeat of ideals to form a bloc against the Bharatiya Janata Party (BJP).

"Political capital of the movement sold to symbols of political corruption. Ashamed!"

Lok Janshakti Party (LJP) leader Chirag Paswan said he was surprised to see Mr Kejriwal hugging RJD chief. "You cannot give Lalu ji a benefit of doubt as he has been convicted in a corruption case. Kejriwal is known for his anti-corruption stand and his hugging Lalu ji indicates whether he has stopped his war against corruption."

BJP's Sambit Patra also attacked Mr Kejriwal saying the AAP chief used to hold one press conference after another in which he would name Lalu Yadav in his list of most corrupt politicians.

"Yesterday, Arvind Kejriwal hugged the ideology which he had been opposing," Mr Patra said.

Delhi Chief Minister was criticised even on social media with many even posting a tweet of his that wrote in October 2013.

"Laloo made crores in fodder scam. But no order for recovery of that money. Just 25 lakh fine and few years in jail. A sweet deal," Mr Kejriwal had tweeted.

Hitting back, Mr Kejriwal supporters claimed that it was Lalu Yadav who forcibly hugged him despite his reluctance and defended the friendly gesture between the two saying that it was nothing but a "political courtesy".