Why Bengaluru's Power Cuts Are The Worst in 25 Years

Half the shortage will be fixed by the end of the month, the state's power minister has said.

Bengaluru: Bengaluru is witnessing the city's worst power crisis in 25 years - one that means at least four hours of blackout every day in India's IT capital.

The reason is the deficient monsoon which has also spelt crisis for Karnataka's farmers and caught the government completely unprepared.

As of now, the reservoirs in the state's hydel power plants have water up to only 33 per cent of their capacity, said Karnataka's power minister DK Shivakumar.

With only around 3,500 megawatts - more than one-third out of the state's daily requirement of 9,000 megawatts - coming from the hydel power plants, this has meant an acute shortage, he said.

"We are facing this situation after 25 years. We did not anticipate such a shortfall so we did not plan for this much," Mr Shivakumar added. There were many technical problems too, he said, including at the thermal power units.

The shortage has hit Bengaluru's industry and people alike. A local news TV channel on Tuesday conducted its primetime news debate show lit with candles to highlight the people's ordeal. 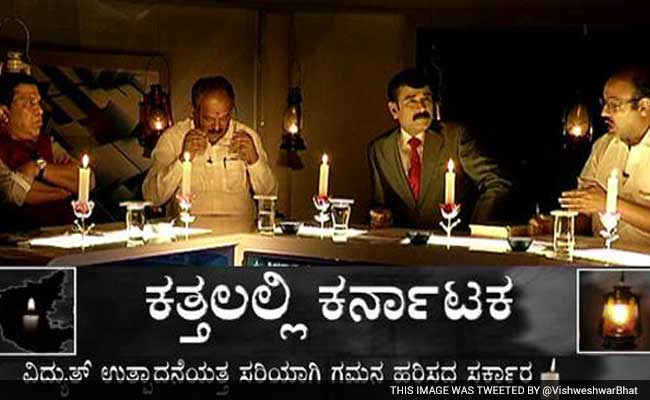 A resident of Bengaluru, Sridhar, said, "Initially, the government said there will be two hours of power cut. Then three hours and now it is four hours. It is really pathetic."

The problems are likely to continue for the rest of the year as most of the measures being taken -- such as buying power from other states and the Centre -- are stopgap ones.

As of now, the Centre is supplying 200 megawatts after 10 pm every day, instead of the 1,500 megawatts the state has asked for, the minister said. Still, half the shortage, he assured, will be fixed by the end of the month.

"We have very big customers. We do not want to spoil the image that Bangalore and Karnataka has. By January I will ensure there will be no power cut," the minister added.