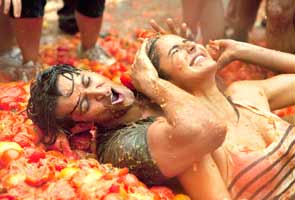 Bangalore: Karnataka chief minister Sadananda Gowda has instructed police in Bangalore and Mysore not to give permission for the Tomatina festival (organised by a private firm) scheduled for this Sunday. The festival involves participants hurling tomatoes at each other.

A delegation of tomato growers from Kolar district, environmentalists and NGO representatives had met Mr Gowda and told him that "throwing for fun at each other, tomatoes grown through hard work by farmers reflects foreign culture. In the name of 'La Tomatina' festival, permission should not be granted to waste tomatoes".

BJP MLA BN Vijaykumar, who led the delegation, said at least 5,000 people were expected to take part in the festival and if each participant would hurl 80-100 tomatoes, it would lead to wastage of five lakh tomatoes.

"62,000 kg of tomatoes getting wasted for the fun of the rich is not fair," he told the Chief Minister, who immediately responded to the delegation's concerns and wrote letters to the police chiefs ordering to take steps towards cancellation of the event.

Promoted
Listen to the latest songs, only on JioSaavn.com
The festival, officially called La Tomatina is a first of its kind in India. It is a Spanish import and was recently seen in the recent Bollywood blockbuster Zinagi Na Milegi Dobara. Though the festival has been banned many times in Spain it still is celebrated every year on the last Wednesday of August.

The festival had drawn a lot of flak from Bangalore citizens who called it a sheer wastage of food and unnecessary for a country like India. The Delhi leg of the festival, which was planned for the last week of August, was also cancelled after it received a negative response from people.