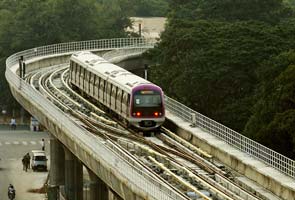 Union Urban Development Minister Kamal Nath and Railway Minister Dinesh Trivedi will flag off the train in the presence of Karnataka Chief Minister D V Sadananda Gowda at the inaugural function in the city.

In the first phase, Bangalore Metro Rail Corporation Ltd (BMRCL) will run the services on seven-km stretch metro rail from Mahatma Gandhi road to Byyappanahalli from morning to late evening. The service will connect the city centre to the eastern suburbs and will run on elevated tracks.

Residents hope the metro will ease traffic congestion in the city which has become India's IT hub. Built at a cost of Rs 6000 crore, at least 20,000 people are expected to use the services each day.