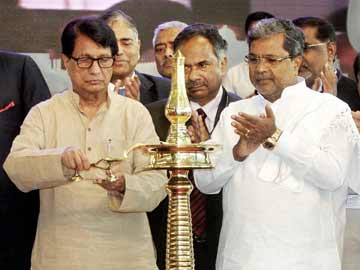 Union Minister for Civil Aviation Ajit Singh, Karnataka CM Siddaramaiah and others at the renaming of Bangalore International Airport.

Bangalore: The swanky expanded international airport in Bangalore was Saturday named after Bangalore's founder Kempegowda, a chieftain who ruled the city in the 16th century under the Vijayanagara empire.

As the city's founding father, Kempegowda laid the stage for the development of the entire region.

"Kempegowda planned and build the city and is noted for societal reforms and contribution in building temples and water reservoirs across Bangalore. The airport's new name honours the founding father," Mr Siddaramaiah recalled.

The airport has been expanded and modernised at a cost of Rs 1,500 crore to receive large aircraft like Airbus A380, which international carriers operate on long-haul routes the world over.

As the world's largest passenger aircraft, A380 of the global French aerospace major is a double-deck, wide body four-engine jet.

The airport has been built to reflect the city's dreams, culture, ethos and the state's landscape. The expanded terminal is spacious and at par with the best in the world in terms of convenience.

"With Karnataka on the growth path, there is a need for world-class infrastructure. Our endeavour is to go beyond catering to its needs. We look at the region's economic growth as an opportunity to empower people, enrich their lives and contribute to its development," GVK group chairman G.V.K. Reddy said at the event.

As the country's leading infrastructure major, GVK group leads the BIAL with 43 per cent equity stake in the public-private consortium.

The new terminal has 26 boarding gates, 15 aerobridges, including one special one to facilitate A380. A new, high-tech control centre helps both airlines and concessionaires to streamline their processes.

"Since the airport's operations began in 2008, we have worked with the state government to promote the region, its rich culture and heritage. Our objective is to play a vital role in the state's economic development and realise our vision of being the gateway of south India," Sanjay Reddy said.

The airport has the capacity to cater to 20 million passengers annually.

Promoted
Listen to the latest songs, only on JioSaavn.com
BIAL posted Rs.114 crore net profit on a gross revenue of Rs.560 crore in 2012-13.