Siddaramaiah to be sworn-in as Karnataka Chief Minister on Monday 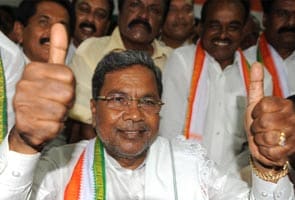 Bangalore: Siddaramaiah, who led the Congress' battle against BJP Government's corruption in Karnataka, will take oath on Monday as the 22nd Chief Minister of the state.

64-year-old Siddaramaiah will be sworn in alone by the state Governor H R Bhardwaj on Monday at a ceremony at Sri Kanteerava Stadium where 50,000 people from his home district Mysore and nearby areas are expected to attend.

Mr Bhardwaj will administer the oath of office to Siddaramaiah, who was chosen on May 10 as the Congress Legislature Party leader in a hotly-contested race, edging out party veteran and Union Labour Minister M Mallikarjuna Kharge.

Though Siddaramaiah was the front-runner for the coveted post his selection came only after AICC observers headed by Defence Minister AK Antony asking party legislators to express their choice in writing.

After taking the consent of AICC Chief Sonia Gandhi and party Vice President Rahul Gandhi, Antony announced in the Congress Legislature Party meeting the election of Siddaramaiah, who had joined Congress from JDS six years ago and was a Deputy Chief Minister under N Dharam Singh.

A lawyer-turned politician, Siddaramaiah had narrowly missed the Chief Minister's "gaddi" in 1996 after the incumbent H D Deve Gowda went on to become Prime Minister.

Siddaramaiah, who hails from Kuruba community, the third largest in the state, was then picked by J H Patel. Both under Mr Deve Gowda and Mr Patel, he served as Finance Minister.

With Siddaramaiah all set to install his Cabinet next week, lobbying for ministerial berths has intensified.

However, expanding the Cabinet and keeping everyone happy would be a tight-rope walk for Siddaramaiah. Of the 120 Congress legislators, there are at least 34 former ministers.

With the Karnataka Assembly having a strength of 224 members, the council of ministers can have a maximum of 34 members, including the Chief Minister.

Siddaramaiah and KPCC president G Parameshwara who discussed Cabinet expansion, are expected to meet party brass in Delhi on Monday to get a final nod for the ministry formation.

Battered by a series of scams at the national stage, Congress put up an impressive show in the May 8 Assembly elections winning 121 seats, unseating the BJP.

Election has been postponed in Periyapatna Assembly constituency due to the demise of BJP candidate Sanmoggegowda.

Promoted
Listen to the latest songs, only on JioSaavn.com
The poll is scheduled on May 28 and counting will take place on May 31.