Rahul Gandhi, my father was not the PM; still people love me: Narendra Modi 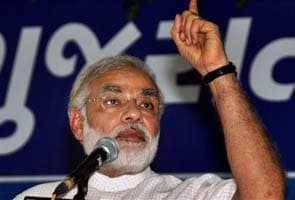 Siddhpur: The jury is still out on whether 2014 will be a Rahul Gandhi vs Narendra Modi personality clash, but Mr Modi, campaigning for Gujarat 2012, made a direct comparison today.

"Rahul Gandhi, my father was not the PM. He was not even a sarpanch. Still people love me," Mr Modi said at a rally in Siddhpur in Patan district in north Gujarat just 30 km away from where Mr Gandhi had held a rally this morning in Palanpur in Banaskantha district.

Mr Modi's speech had many taunts for Mr Gandhi, with the CM saying variously, "Rahul baba, if you come for a rally then do your homework. I knew immediately after I landed from the helicopter what you said," and "today Rahul baba is here in Palanpur...Rahul baba when you are on the helicopter, do see this large crowd," and also, "Rahul doesn't know geography or history".

The Gujarat Chief Minster, wearing his trademark short sleeved kurta, claimed that Rahul Gandhi had delivered the same speech that he had given earlier this week in other parts of the state, much to the crowd's delight. "Rahul baba", he said, "if you come for a rally then do your homework. I knew immediately after I landed from the helicopter what you said," and added that the Congress was "upset that the people of Gujarat take the name of Narendra Modi."

The Chief Minister has taken umbrage at Mr Gandhi's scathing criticism of development or what the Congress calls the lack of it in Gujarat. "Don't you get 24 hours electricity? 24 hours water? Do you need a generator?" the CM asked the crowds gathered. "No," they roared. An hour earlier, Rahul Gandhi had asked the same question and the crowd at his rally had answered, "yes"

Mr Modi is primarily asking Gujarat to vote him back on the development plank. Mr Gandhi and other Congress leaders like Sonia Gandhi and the Prime Minister have accused Mr Modi of selective development that has ignored the poor. Mr Modi shot back today claiming that Mrs Gandhi had only campaigned for "poor candidates" and said he was surprised that Congress managers had only arranged for her to campaign in constituencies with rich candidates. Case in point, he said, the contest in Siddhpur  where the BJP's Jaynarayan Vyas was pitted against the Congress' Balwantsinh Rathod.

This electoral battle is being closely watched and described as the "most educated vs the richest". Mr Rathod has declared assets worth Rs 268 crore in his affidavit.

While the large crowds that had waited over an hour for Mr Modi to turn up, backed him when he spoke on the Gandhis. However, the Chief Minister's game plan to rake the Pakistan bogie via the Sir Creek issue, failed to evoke the same interest.

Modi accused PM Manmohan Singh of working against "national interest" and said that Dr Singh and Pakistani president Asif Ali Zardari had cracked a deal where the contentious Sir Creek region was to be given to Pakistan.

"I have proof. When Mr Zardari was here in India and visited Ajmer Sharief, he had lunch with the PM where the sir creek issue was raised. They again met this September in Tehran in Iran and discussed it. I wouldn't have written to the PM during the elections. But since a meeting between India and Pakistan is to be held on December 15, I was forced to write to him."

Promoted
Listen to the latest songs, only on JioSaavn.com
Personalising and connecting the issue to the safety of Gujarat, Mr Modi said not one inch of land will be given to Pakistan.

Mr Gandhi at his Palanpur rally brought up the issue of contaminated water in the area. "In the water you get here, don't you get fluoride and nitrate? The state is being run by a single man. Your voice is not being heard." The crowd was large in number comprising primarily farmers, who are said to be upset with Mr Modi's policies.