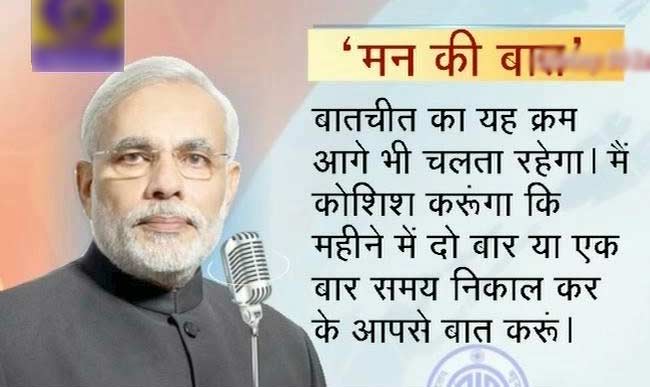 New Delhi: By speaking to the country through a radio address late last month, the Prime Minister did not violate the rules that apply to politicians once elections are announced, the Election Commission has told the Congress today.

On October 3, the PM delivered what he said would the first of many radio chats titled 'Man ki Baat' or  'Talking from the Heart.' He used the address on state-run All India Radio to include the millions who do not have access to  television in rural India to join his efforts for an economic recovery.

State elections in Maharashtra and Haryana will be held on Wednesday.  The model code of conduct became effective on September 12- it prescribes do's and don'ts for political parties as they campaign.

The Congress had alleged that the government had "misued" state machinery to promote the BJP.  It also said that during the model code of conduct, politicians can only appear on government radio or television channels in a draw of lots monitored by the Election Commission and Prasar Bharti, the parent body of state-run media.

The Election Commission, however, said that it had reviewed the radio speech and it "did not find anything in the broadcast matter which constituted violation of Model Code of Conduct. "

The BJP has also lost an appeal with the Election Commission.  It had complained that after the model code of conduct kicked in, the Congress government in Haryana cleared a land deal designed to deliver windfall gain to Robert Vadra, the son-in-law of Congress chief Sonia Gandhi.

Promoted
Listen to the latest songs, only on JioSaavn.com
After hearing the Haryana government's response, the Commission has ruled that is incorrect.