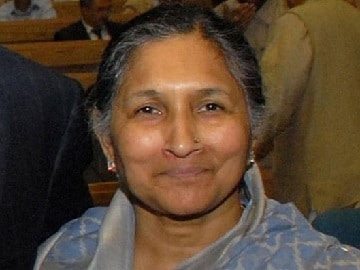 Chandigarh: Savitri Jindal, the richest woman in the country, lost from the Hisar assembly seat, officials said on Sunday.

Ms Jindal, who was elected from Hisar in 2005 and 2009, and is a minister in the outgoing Bhupinder Singh Hooda-led Congress government in the state, lost to BJP candidate Kamal Gupta by 13,646 votes.

Ms Jindal, who is the mother of billionaire industrialist-cum-politician Naveen Jindal, trailed during counting. She was the Congress candidate on the Hisar seat.

She is the chairperson of the multi-billion rupee OP Jindal group that has interests in the steel, power and mining sectors. First named the country's richest woman in 2008 by Forbes, she has retained the position in the October issue of the respected business magazine.

She has been placed 12th in the list of India's richest, with a net family worth of $6.4 billion (Rs. 39,040 crore at 1 dollar = 61 rupees). The list includes industrialists Anil Ambani and Mukesh Ambani, NRI steel tycoon Lakshmi Mittal and realtor K P Singh.

Court Notice To Delhi, Poll Body Over "I Love Kejriwal" Message On Autos