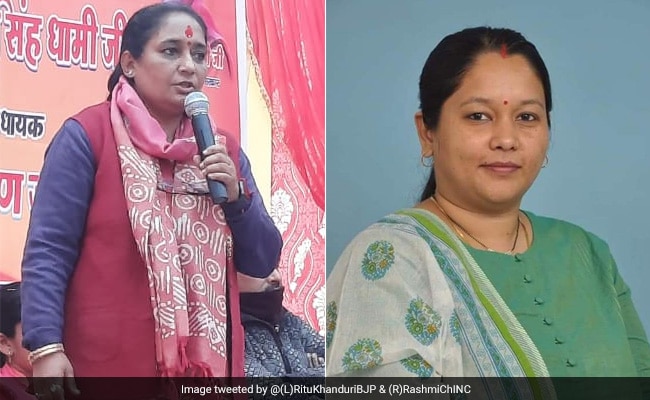 Kotdwar and Haridwar (rural) seats in Uttarakhand are all set to witness interesting contests when the state goes to polls on February 14 with the daughters of two former chief ministers preparing to avenge the defeats of their fathers from the two constituencies.

Mr Khanduri had lost from Kotdwar in 2012 and Harish Rawat from Haridwar rural in 2017 when the two stalwarts had contested from the seats as incumbent chief ministers.

Congress nominee Surendra Singh Negi had registered a victory over Khanduri in Kotdwar in 2012 defeating him by 4,623 votes. Mr Negi had garnered 31,797 votes while Mr Khanduri had got 27,194 votes.

Similarly, Harish Rawat, who contested from Haridwar rural in 2017, lost to BJP's Swami Yatishwaranand who trounced him by 12,278 votes.

What makes the contest even more interesting is that the duo is pitted against the same challengers who had defeated their fathers - Negi and Yatishwaranand.

MS Bhushan made her political debut in 2017 by winning from Yamkeshwar seat.

Mr Negi, a former MLA from Kotdwar and a minister in the Harish Rawat government, had lost the seat in the last assembly polls.

While Mr Negi has already won the Kotdwar seat once and has an edge over Ms Bhushan in terms of experience, the latter is a fresh face and being the daughter of a BJP veteran can work in her favour.

Mr Khanduri is widely respected for his political integrity and is considered by many as one of the best performing chief ministers.

However, Dhirendra Chauhan, who was denied a ticket from Kotdwar by the BJP, has entered the fray as an independent and may spoil Ms Bhushan's chances of a win.

Anupama Rawat, who makes her electoral debut this time, has been working hard in Haridwar rural constituency for quite some time and enjoys a connect with people at the grassroots, say poll watchers.

However, they feel taking on Yatishwaranand, a two-time MLA and cabinet minister in the Pushkar Singh Dhami government who is contesting from the seat for the third time, will be a difficult task for the newcomer.