Rita Bahuguna Joshi has also said that she will always continue working for BJP anyway and the party can choose to accept or not accept the proposal. 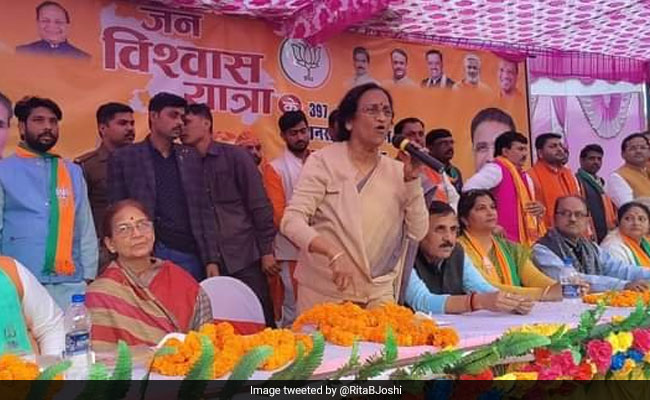 Bharatiya Janata Party MP and a senior leader from Uttar Pradesh Rita Bahuguna Joshi on Wednesday said that she is patiently waiting for the decision of the party's top leadership about her proposal sent to BJP chief JP Nadda for giving ticket to her son in the upcoming state Assembly elections.

Speaking to ANI, Ms Joshi's close sources said, "She (Rita Joshi) is waiting for the party's decision on her proposal which will be taken after the meeting today. She is hoping that their decision will be communicated to her and accordingly, she will make her next move."

"He (son Mayank Joshi) has been working since 2009 and has applied for it (a ticket from Lucknow Cantt), rightfully. But if the party has decided to give the ticket to only one person per family, I will resign from my present LS seat if Mayank gets a ticket," Ms Joshi told media persons.

She had also said that she will always continue working for BJP anyway and the party can choose to accept or not accept the proposal. "I had already declared that I will not contest elections, many years ago," Ms Joshi added.

Meanwhile, speculations have surfaced that Ms Joshi is in touch with the Samajwadi Party and other parties in the state.

Replying to these speculations, Ms Joshi told ANI, "I have been in Delhi for the last ten days and have not met any other party leaders and neither do I intend to. I have given my proposal to the BJP top leadership and I will wait patiently for them to respond to me."

Notably, Ms Joshi joined BJP in 2016 after serving Congress for 24 years. She joined the party in the presence of Union Home Minister Amit Shah and contested elections on BJP ticket from Lucknow Cantt seat in 2017.