The 14-odd minutes of banter, cooking, and eating comes across as a friendly session between Mr Gandhi and the group of Pudukottai villagers. 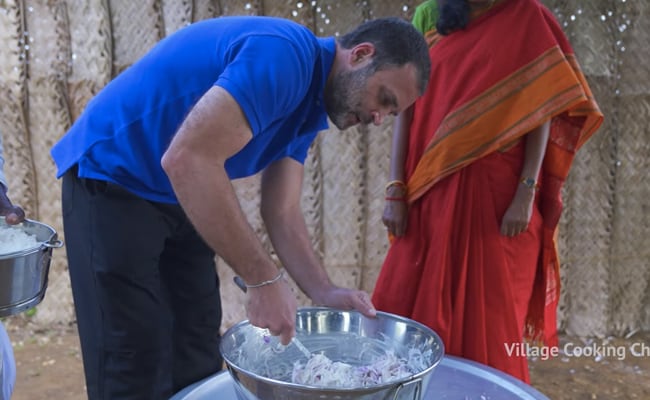 Rahul Gandhi lending a hand with the preparation of mushroom biriyani in Tamil Nadu.

The way to Tamil Nadu's heart may be through its stomach this poll season. Even if not, Rahul Gandhi's recent appearance in a video of the Village Cooking Channel has surely left the men behind the increasingly popular YouTube group beaming and starry-eyed.

Appearing only months ahead of the state assembly elections, the video is making quite a splash.

The 14-odd minutes of banter, cooking, and eating, posted on the video-sharing site on Friday, comes across as a friendly session with a set of people in disbelief on one side and a relaxed Mr Gandhi on the other. Amidst his tour of the state, the Congress leader, in a blue T-shirt and sporting a thick stubble, even partakes in the cooking process, naming, almost accurately, some of the ingredients in Tamil.

"Vengayam" he says, as he drops onion into vessel, following it up with "thayir" (curds) and "kalluppu" (rock salt).

When, after tasting it, he says "very good" appreciating his own preparation, a young man pulls his leg in Tamil: "You prepared it. So, it tastes good to you." Easy laughter follows.

While the main group of men prepares a sumptuous cauldron of mushroom biriyani, Mr Gandhi says: "It is smelling very nice. It is looking very nice also." He then enquires after some of his aides not present at the immediate scene, to make sure they, too, get to partake of the meal being prepared.

Settling down cross-legged on a dry-grass mattress, the Congress leader asks the Village Cooking Channel group about its plans and its success till now. After all, the increasingly popular group, based out of Tamil Nadu's Pudukottai district, has gathered over seven million subscribers by simply cooking some lip-smacking dishes for their YouTube viewers. One of its perennially popular preparations involves roasted winged termites.

"We want to cook in various parts of the world. The US, Thailand, Malaysia," says one young man, who is part of the team. "Right now, we cook, we eat, and we make money. It doesn't satisfy us. We want to feed others."

Mr Gandhi then offers to contact his friend in the US, a long-time associate of the Gandhi family, to see if their dream could be fulfilled. "Shall I talk to Sam…Sam Pitroda? And they can go to Chicago and cook something…"

He also suggested that they take their cooking to other parts of India, too.

The villagers graciously accept the offer.

Mr Gandhi repeats the offer towards the end as a departs, but not before extracting a promise from the eldest member of the team. The moustachioed man turns emotional as he says, "Indira Gandhi's grandson to me is…" before trailing off. To which, Mr Gandhi replies: "Nandri (Thank you) from my side…Next time I come, make me try the (winged) termite dish…"