The BJP is contesting in all the 11 constituencies in the Naga dominated areas, taking on ally NPF, and arch-rival Congress. 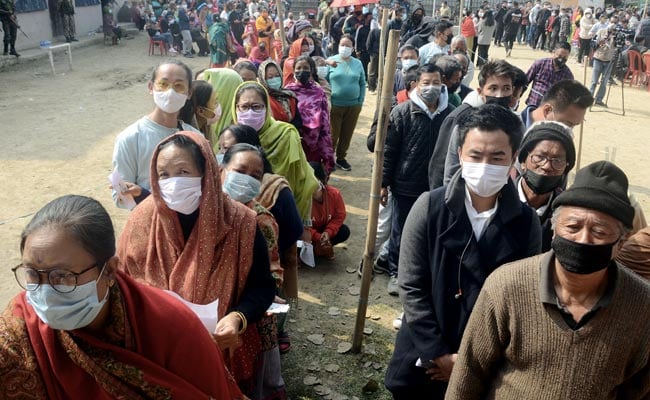 The second phase of the Manipur elections on Saturday will see a closely watched contest in 11 constituencies in the hilly areas of the state dominated by the Naga tribe.

In the past five years, the BJP has tried a reach out to the region, trying to bridge the gap between the valley areas of the state and the hills which were once the epicentre of bandh and blockades.

The party is now trying to make inroads into the political bastion of its ally the Naga People's Front or NPF and the Congress with their pitch of peace and development over the core issues of the Naga peace deal.

The magnificent hills once used to reverberate with gunshots but now a highway is being built to give Ukhrul much better connectivity to Imphal.

Riding on this development push, the BJP is contesting in all the 11 constituencies in the Naga dominated areas, taking on ally NPF, who are fighting solo, and arch-rival Congress.

At Ukhrul, the BJP has fielded former national footballer Somatai Shaiza. He is trying to win over the Christian-dominated area for the BJP.

"This time the BJP would form a government of its own. So our people also want to be with BJP and part of the government. I thought politics was totally different to football but it is similar. Observe, analyse and execute," said Somatai Shaiza to NDTV.

But the Naga Peoples Front will not let go of its bastion easily. It has raised the delay in the Naga peace talks and the slow development in Naga areas. A former bureaucrat Ram Muivah is its candidate from Ukhrul.

"In Ukhrul there are no proper roads, water, internet and there is a shortage of electricity supply. And for us, the focus even now is the peace agreement and NPF is the only party pushing this agenda," Ram Muivah told NDTV.

The sitting MLA is from Congress but this time their campaign is low-key.

Out of the 11 constituencies in Naga areas, in 2017 the NPF had won four, Congress four, BJP one, and NPP one.

Ukhrul is the home district of armed rebel group NSCN (IM) chief Th Muivah, who has not visited the area for decades, and the peace talk has been stalled on the contentious demands of a separate flag and constitution.

"Every Naga feels bad that our leader Muivah cannot come to Manipur to home at Ukhrul. So for us, Naga issue solution is the key issue," said Chonchui, a resident.

Which way the winds will blow in the Naga hills of Manipur might decide who will form the next government in this multi-corner poll battle. Many say successive state governments have failed to provide the very basic necessities for years.

"It the moral responsibility of people to provide basic necessities and it should not matter if our MLA is from Congress, BJP or NPF. People should get facilities," said Donny, a young man in Ukhrul.