Parties Give Preference To Political Families In Karnataka By-Elections

The Shivamogga Lok Sabha Seat will witness a contest between the sons of three former chief ministers. 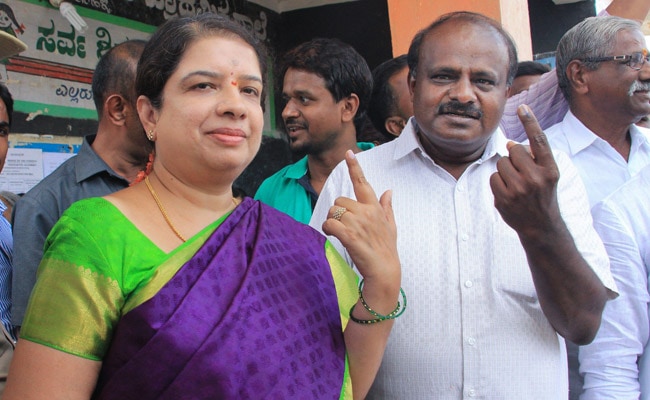 By-elections for three Lok Sabha seats and two assembly seats in Karnataka will be held on November 3. Apart from the Jamkhandi Assembly seat, in which Congress lawmaker Siddu Nyamagouda died earlier this year, all the other seats fell vacant because of resignations.

The BJP members of Parliament from Shivamogga and Ballari - BS Yeddyurappa and B Sreeramulu - and Janata Dal (Secular) lawmaker from Mandya CS Puttaraju, had chosen to resign after getting elected to the state assembly in May this year.

The other assembly seat Ramanagara, was won by Chief Minister HD Kumaraswamy of the Janata Dal (Secular). He had contested from two seats - Channapatna and Ramanagara - and he has chosen to retain the former.

Mr Kumaraswamy said today, "After several rounds of discussion, seat-sharing between the Congress and Janata Dal (Secular) has been finalised. From today onwards, we are going to fight the election unitedly. "

Not surprisingly, many of the tickets for the by-elections have been allotted within political families.

Mr Kumaraswamy's wife, Anita Kumaraswamy, has filed her nomination from Ramanagara. The Congress will not contest as part of the coalition understanding. The BJP has fielded Chandrashekhar, son of CM Lingappa, a Congress member of the legislative council.

The Shivamogga Lok Sabha Seat will witness a contest between the sons of three former chief ministers. While the BJP has fielded Mr Yeddyurappa's son BY Raghavendra, the Janata Dal (Secular) candidate will be Madhu Bangarappa, son of S Bangarappa. The Nitish Kumar-led Janata Dal (United) has also entered the fray, announcing that it would field Mahima Patel, son of former chief minister JH Patel, from the seat.

Madhu Bangarappa told NDTV, "I said - 'give opportunity to others' but (party) leaders said I should contest. They said it would also strengthen the coalition government. They (the voters) have blessed my father. I think they will bless me also."

In iron ore-rich Ballari, BJP leader B Sreeramulu's sister Shantha may be given a ticket. She has represented the seat from 2009 to 2014.

Mr Sreeramulu, a close aide of the controversial Reddy brothers, won from the Molakalmuru seat in Chitradurga district in the Assembly elections earlier this year. He had also contested against outgoing chief minister Siddaramaiah in Badami and lost by a narrow margin of 1696 votes.

The Congress has fielded VS Ugrappa from the Ballari Lok Sabha seat.

In Mandya, which is considered a Janata Dal (Secular) stronghold, the party has fielded LR Shivaramegowda. His BJP opponent is Dr Siddaramaiah, a retired commercial tax officer, who joined the BJP recently.

In the Jamkhandi Assembly constituency, the Congress has fielded Anand Nyamagouda, son of Congress lawmaker Siddu Nyamagouda who died in a car accident barely a few weeks after being elected earlier this year.

"We are confident of winning all five seats with a united campaign," Dinesh Gundu Rao, president of the Karnataka Pradesh Congress Committee, told NDTV.

The term for the Lok Sabha seats will be very short, given that the general elections are due in a few months' time. But that hasn't made the battle any less fierce.